The community is located between Sandstone and Duluth along State Highway 23 (MN 23); near the boundary line for Pine and Carlton counties.

The Nemadji River flows through the community. The Nemadji State Forest is nearby. The communities of Duquette, Kerrick and Holyoke are all near Nickerson. 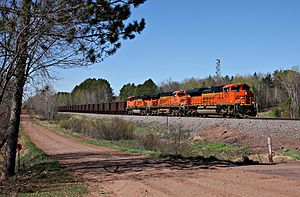 A BNSF Railway freight train passes near Nickerson on the Hinckley Subdivision railway line in 2011.

The community of Nickerson in northern Pine County was named after John Quincy Adams Nickerson of Elk River, Minnesota; who promoted the construction of the line of the Great Northern Railway that connected Sandstone to Duluth. Nickerson had a post office from 1895 to 1954.

All content from Kiddle encyclopedia articles (including the article images and facts) can be freely used under Attribution-ShareAlike license, unless stated otherwise. Cite this article:
Nickerson, Minnesota Facts for Kids. Kiddle Encyclopedia.