The Sarasota Opera House (originally the Edwards Theatre) is an historic theatre, now opera house, located at 61 North Pineapple Avenue in Sarasota, Florida. The building was the vision of A.B. Edwards, the first mayor of Sarasota. It opened on April 10, 1926, with a three-story entrance containing "eight shops on the ground floor, 12 offices on the second floor, and 12 furnished apartments on the third, while the theatre's auditorium contained an orchestral pipe organ. As noted on the Sarasota Opera's website, the Sarasota Herald-Tribune hailed Edwards for "having admitted Sarasota into a fairyland of costly decoration, rich furnishings and never to be forgotten artistry."

The building was designed by Roy A. Benjamin in the Mediterranean Revival Style Architecture and constructed by the GA Miller Construction Company.

In the 1920s, the building quickly became a popular entertainment venue with major performers of the day, such as Will Rogers (in 1927) and the Ziegfeld Follies (1928) appearing there. The world premiere of Cecil B. DeMille's The Greatest Show on Earth (which had been filmed in Sarasota) was shown there in late 1951, attended by its stars Charlton Heston and Dorothy Lamour. Elvis Presley performed a concert there on February 21, 1956.

Over the years, managements changed as did the name of the theatre: in December 1936 it became The Florida Theatre while, in the same year, a hurricane damaged the Robert-Morton pipe organ. Various attempts to modernize removed most of its original Art Deco. It became a full-time movie theater, but, finally, in 1973, it closed.

However, opera was beginning to be presented in Sarasota by a non-profit organization, the Asolo Opera Guild, which presented small-scale operas from out of town in the 320-seat Asolo Theater. By 1974, they had begun to produce their own operas. In 1979, the Guild bought the old Edwards Theatre for $150,000. Needing major renovations to restore the house and to accommodate the demands of opera, the Association began renovations in 1982, the result of which was that the new Sarasota Opera House appeared on the National Register of Historic Places in March 1984. 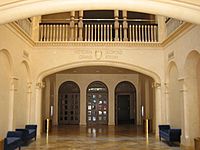 Further renovations between the end of the 2007 season and the opening of the 2008 season have led to a significantly-enhanced opera theatre.

The $20 million renovations included gutting the auditorium, which resulted in a newly configured seating plan, expansion of the public areas and Opera Club on the second level, the opening up of the 3-story atrium to expose a newly installed skylight system which had existed in the 1926 building, but which had been covered by a ceiling and a chandelier used in the film, Gone with the Wind. In 2008, the Sarasota Opera reopened with Verdi's Rigoletto. Seating was expanded to approximately 1,200. After the 2009-2010 season, some seats along the far sides were taken out and replaced with aisles on either end of the theater leaving 1,119 seats.

All content from Kiddle encyclopedia articles (including the article images and facts) can be freely used under Attribution-ShareAlike license, unless stated otherwise. Cite this article:
Sarasota Opera House Facts for Kids. Kiddle Encyclopedia.