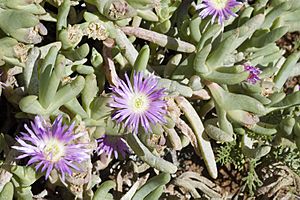 Sarcozona praecox, commonly known as sarcozona, is species of flowering plant in the family Aizoaceae and is endemic to Australia. It is a small erect to low-lying, succulent shrub with leaves that are triangular in cross-section and arranged in opposite pairs, and daisy-like flowers with twenty to eighty pink, petal-like staminodes and 20 to 150 stamens.

This species was first formally described in 1853 by Ferdinand von Mueller who gave it the name Mesembryathemum praecox in the journal Linnaea: ein Journal für die Botanik in ihrem ganzen Umfange, oder Beiträge zur Pflanzenkunde from specimens collected in the Flinders Ranges. In 1965, Stanley Thatcher Blake changed the name to Sarcozona praecox.

All content from Kiddle encyclopedia articles (including the article images and facts) can be freely used under Attribution-ShareAlike license, unless stated otherwise. Cite this article:
Sarcozona Facts for Kids. Kiddle Encyclopedia.