The old Schiller Piano Company, also known as Conover Square, is located in Oregon, Illinois the county seat of Ogle County. The company was founded in 1890 and remained in operation until 1971. The company produced many thousands of pianos through the years and in 1936 the company merged with the Cable Piano Company and produced pianos under the name Cable and Conover. The company's 120,000-square-foot (11,000 m2), stucco clad factory and its iron water tower base still stands in Oregon and both are considered contributing properties to the U.S. National Register of Historic Places Oregon Commercial Historic District. In 1975 the facility was converted into the Conover Square Shopping Mall and has remained so ever since.

The Schiller Piano Company, which was historically the largest industry in Ogle County, was founded around 1890. When founded, the company was located at the northwest corner of Oregon's Second and Washington Streets. The Schiller Piano Company was started using money from Oregon resident and the first president of the company, F.G. Jones. Jones was not active in the company's management until 1895 when he reportedly left his well-established mercantile business to take an active position at the piano company as general manager and president of the factory. Sources conflict as to whether Jones actually left his mercantile interests behind, which included work as the president of the Oregon Electric Light and Power Company and Oregon Machine and Foundry. In addition the Schiller Company owned an interest in the Power Company and two Jones sons, George H. and Edgar B., held management positions with the firm. 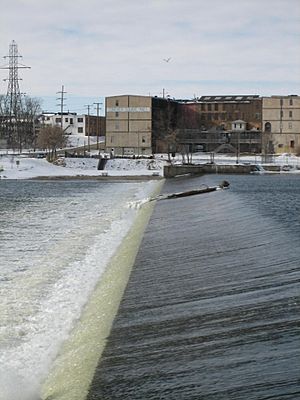 The U-shaped rear facade of the Schiller Piano Factory from across the Rock River.

Maps from 1893 show the Schiller Piano Company, identified as the Oregon Piano Company, in much smaller facilities along Franklin Street. By 1899 maps show that the company moved into slightly expanded facilities in the same location, as the map shows minor expansion along the west end of the facility. Maps in 1905 show the larger, present-day factory with the original structure, identified as the Oregon Piano Factory, still extant on the building's south side.

Located immediately to the north of the piano company was a large, gable-roof grain elevator owned by the Neola Elevator Corporation. North of Neola was another elevator, owned by Oregon Cereal Company. Facing Third Street, standing in front of the Neola company, was an agricultural supply store. By 1913 the store had disappeared and the Schiller Company's iron water tower was erected near its former location.

In a little over ten years the Schiller Company had clients in the United States, Canada, Hawaii and Italy; by 1909 it employed 300 people and had manufactured 40,000 pianos. The Schiller Factory had expanded into a 122,506-square-foot (11,381.2 m2) facility adjoining the water power provided by the Rock River to its east. F.G. Jones died in 1913 and his sons George and Edgar took over management of the Schiller Company. In 1936 the Schiller Piano Company merged with the Cable Piano Company and produced pianos under the name Cable and Conover. In 1943 the old Schiller factory was sold to Winter and Company of New York City. The factory remained in operation producing different products through the years, such as talking machines, player pianos, spinnets, baby grand pianos and pianos. Through the late 1960s the factory employed 100 people and produced up to 6,000 pianos per year. In 1971 the plant closed after the company shut down operations and moved them to Memphis, Tennessee. In 1975 Dean Dye of Oregon purchased the property and opened it as the Conover Square Shopping Mall. The building has changed owners at least twice since Dye purchased it but it has remained in use as "Conover Square" and occupied by various shops. 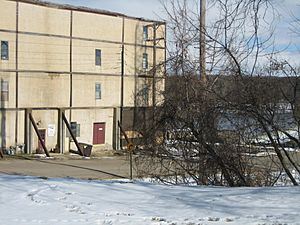 The south facade as the terrain slopes toward the Rock River, note the iron buttresses.

The Schiller Piano Company factory building's rear, Franklin Street, wing was constructed in 1893. The entire 120,000-square-foot (11,000 m2) industrial structure sits on the west bank of the Rock River. Around 1900 the rest of the Piano Company's main complex was added to the existing structure. The main (west) facade of the Schiller Piano Company factory building faces Third Street with no setback from the street and its secondary facade, along with the rest of the exterior, features an exposed basement because the elevation lowers as the terrain slopes toward the Rock River. The rear facade exhibits a U-shape while maintaining the exposed basement level found throughout much of the rest of the structure. The front facade features seven bays, demarcated by wooden trim between the stucco panels, entrances are located on each of the even numbered panels. The roof is an unusual multi-gabled, low pitch roof, which is still original in its form. The building features two windows over each of the entrance bays. After Dale Dye purchased the facility the stucco cladding was added to the exterior in 1977-1978, covering all original windows and walls; they remain extant beneath the stucco, and some show up in post-2005 photographs.

The building's long south facade stretches ten bays as the ground slopes toward the river. All of the south bays feature one over one single-hung sash windows on each story except for bays four, seven and eight, which are windowless. The south facade also features piers with iron buttresses as well as a third bay dock door.

The base of what was once the Schiller Piano Company's water tower remains standing on the lot's northwest corner. It is an iron base of four tiers which rises up to where the tank once sat; it was removed sometime prior to 1971. On the second through fourth stories of the base a ladder is still attached. 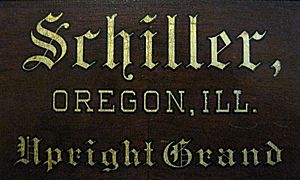 The Schiller Piano Company and its Oregon factory were once the largest industry in Ogle County. After the company merged with Cable, the pianos they produced were considered top of the line. Though Cable and Conover produced pianos under different brand names, those produced under the Conover name are still highly regarded today. The Schiller Piano Factory was specifically included as a contributing property when the boundaries for the Oregon Commercial Historic District were conceived in 2006. The historic district was added to the U.S. National Register of Historic Places on August 16, 2006.

All content from Kiddle encyclopedia articles (including the article images and facts) can be freely used under Attribution-ShareAlike license, unless stated otherwise. Cite this article:
Schiller Piano Company Facts for Kids. Kiddle Encyclopedia.