Schinus molle is an evergreen tree that grows to 15 meters (50 feet). It is native to the Peruvian Andes. The bright pink fruits of Schinus molle are often sold as "pink peppercorns" although S. molle is unrelated to true pepper (Piper nigrum). The word molle in Schinus molle comes from mulli, the Quechua word for the tree. The tree is host to the pepper-tree moth, Bombycomorpha bifascia.

Schinus molle is a quick growing evergreen tree that grows up to 15 meters (50 feet) tall and wide. It is the largest of all Schinus species and potentially the longest lived. The upper branches of the tree tend to droop. The tree's pinnately compound leaves measure 8–25 cm long × 4–9 cm wide and are made up of 19-41 alternate leaflets. Male and female flowers occur on separate plants (dioecious). Flowers are small, white and borne profusely in panicles at the ends of the drooping branches. The fruit are 5–7 mm diameter round drupes with woody seeds that turn from green to red, pink or purplish, carried in dense clusters of hundreds of berries that can be present year round. The rough grayish bark is twisted and drips sap. The bark, leaves and berries are aromatic when crushed.

Schinus molle is native to the arid zone of northern South America and Peru's Andean deserts, and goes to central Argentina and central Chile. It has, however, become widely naturalized around the world where it has been planted, known for its strong wood used for saddles. It was part of the Spanish colonies' supply sources for saddles; as an ornamental and for spice production. S. molle is a drought-tolerant, long-lived, hardy evergreen species that has become a serious invasive weed internationally.

In South Africa, for example, S. molle has invaded savanna and grasslands and become naturalized along drainage lines and roadsides in semi-desert. It is also invasive throughout much of Australia in a range of habitats from grasslands to dry open forest and coastal areas, as well as railway sidings and abandoned farms. In the United States, either S. molle or its close relative Schinus terebinthifolius is particularly invasive in Florida and Hawaii, and can also be found crowding out native vegetation in southern Arizona, southern California, Texas, Louisiana and Puerto Rico. 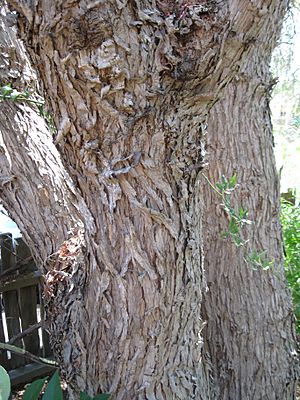 Although not related to commercial pepper (Piper nigrum) the pink/red berries are sold as pink peppercorns and often blended with commercial pepper. The fruit and leaves are, however, potentially poisonous to poultry, pigs and possibly calves. Records also exist of young children who have experienced vomiting and diarrhea after eating the fruit. Presently Schinus molle lacks generally recognized as safe (GRAS) status with the United States Food and Drug Administration.

Extracts of S. molle have been used as a flavor in drinks and syrups.

In traditional medicine, S. molle was used in treating a variety of wounds and infections due to its antibacterial and antiseptic properties. It has also been used as an antidepressant and diuretic, and for toothache, rheumatism and menstrual disorders, with recent studies in mice providing possible support for its antidepressant effects. It has also been speculated that S. molle's insecticidal properties make it a good candidate for use as an alternative to synthetic chemicals in pest control.

Fresh green leaves in bunches are used shamanically in Mesoamerican traditional ceremonies for cleansings and blessings.

The leaves are also used for the natural dyeing of textiles in the Andean region. This practice dates back to pre-Columbian times. The Incas used the oil from its leaves in early mummification practices to preserve and embalm their dead.

The Inca used the sweet outer part of ripe fruit to make a drink. Berries were rubbed carefully to avoid mixing with the bitter inner parts, the mix strained and then left for a few days to produce a drink. It was also boiled down for syrup or mixed with maize to make nourishing gruel.

There is also significant archaeological evidence that the fruits of S. molle were used extensively in the central Andes around 550-1000 AD for producing chicha, a fermented alcoholic beverage.

The tree reproduces through seed, suckers and cuttings. The seeds have a particularly hard coat and germination rates are greatly improved after they have passed through the gut of birds or other animals. Seeds germinate in spring, with seedlings slow growing until established. The seeds easily germinate under the tree in the existing leaf litter of the mother tree, by the hundreds at once and can be easily transplanted.

All content from Kiddle encyclopedia articles (including the article images and facts) can be freely used under Attribution-ShareAlike license, unless stated otherwise. Cite this article:
Schinus molle Facts for Kids. Kiddle Encyclopedia.