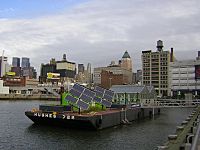 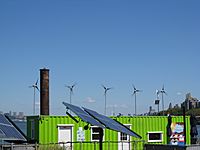 Closer view of the wind turbines in 2008

The Science Barge is a floating urban farm and environmental education center that has been docked in Yonkers, New York, USA since late 2008. The Barge grows crops using a hydroponic greenhouse powered by solar panels, wind turbines, and biofuels. The crops in the greenhouse are irrigated by captured rainwater and desalinated river water. Food is grown without carbon emissions, no agricultural waste is discharged into the watershed and no pesticides are used. The Science Barge is also a public education tool and hosts school groups from Westchester, New York City and the greater New York area visiting during the week, and the general public on weekends. From 2006-2008, the Science Barge docked for periods of two months at each of six stops along the Manhattan waterfront with the goal of educating the public on urban sustainable agriculture.

In 2015, Nathalie Manzano-Smith and Ted Caplow won the Knight Cities Challenge grant competition from the John S. and James L. Knight Foundation with a proposal to build a Miami Science Barge and moor it in Museum Park in downtown Miami, FL. The Miami Science Barge opened on Earth Day, April 22, 2016. The following April, the Barge was gifted to Frost Science Museum. Compared with the original Science Barge, the Miami Science Barge places more emphasis on marine science, conservation, and sustainable aquaculture, while also updating many of the urban agricultural systems featured on the original.

The Science Barge was conceived and designed by Ted Caplow and built by New York Sun Works, a non-profit organization that developed the project in order to educate students and teachers about the science of sustainability through hydroponic farming. The exhibits and ecological experiments that comprise the Science Barge float on a steel deck barge, approximately 115 feet long, constructed in the 1940s and used for cargo and utility work in New York Harbor until leased by New York Sun Works from Hughes Marine in 2006. The Science Barge urban farm systems were built on the barge in Red Hook, Brooklyn in the summer of 2006, and deployed briefly to pier 92 before opening to the public at pier 84 on May 4, 2007, adjacent to the Circle Line Sightseeing Cruises; and the Intrepid Sea-Air-Space Museum. Over the next two years, the barge also made several visits to pier I in Riverside Park South as well as the Chelsea Piers complex in lower Manhattan. 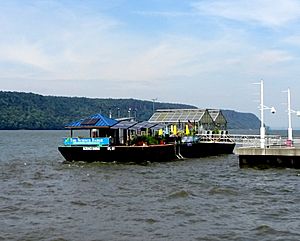 After touring for two years, New York Sun Works sought a permanent home for the Barge and decided to sell the Science Barge to Groundwork Hudson Valley in Yonkers, NY in October 2008 for $2.00. Groundwork Hudson Valley is a non-profit organization focused on environmental justice in distressed communities in the lower Hudson Valley. In November 2008, the Science Barge docked in Yonkers, at the mouth of the Saw Mill River. The site has helped attract visitors to the downtown Yonkers area especially due to its accessibility by mass transit. The placement by the Saw Mill River, a major Hudson River tributary, has called attention to the current restoration work and continued the revitalization of downtown Yonkers. Groundwork Hudson Valley uses the Science Barge to provide a research, training, and development platform for its Yonkers-based food programs including the Get Fresh Yonkers Food Co-op, Farmers Market, and Community-Supported Agriculture (CSA).

The greenhouse on the barge is approximately 1200 ft2, purchased new from Nexus, Inc and constructed in place on the barge. The structure is aluminum and secured to the barge deck via bolts and custom-made welded steel brackets. The walls of the greenhouse are glass and the roof is a rigid, doubled walled polycarbonate plastic. Ventilation is achieved via four mechanical fans, a padwall evaporative cooling system, and a large, automatically controlled atrium roof vent to maximize passive ventilation. Rainwater is harvested from the greenhouse roof and stored in tanks with a 1200-gallon aggregate capacity before being used to irrigate hydroponic crops in a broad and constantly evolving variety of different growing systems and media. The barge has also hosted a number of aquaponic and marine science experiments, including cultivation of tilapia, catfish, crayfish, clams, and oysters, among others.

The energy systems on the barge, in their original configuration, included 2.5 KW of solar capacity mounted on passive trackers, 2 kW of micro wind turbines, a 4 kW biodiesel backup generator, a large lead-acid battery bank providing 1000 amp-hours at 48 volts, and associated support hardware. The barge also deployed a semi-custom reverse osmosis system to desalinate water from the Hudson River for backup use.

All content from Kiddle encyclopedia articles (including the article images and facts) can be freely used under Attribution-ShareAlike license, unless stated otherwise. Cite this article:
Science Barge Facts for Kids. Kiddle Encyclopedia.