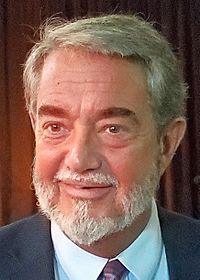 Scott W. Hahn (born October 28, 1957) is an American Christian theologian and apologist. He was born in Bethel Park, Pennsylvania. Hahn's popular works include Rome Sweet Home and The Lamb's Supper: The Mass as Heaven on Earth.

His lectures have been seen through Lighthouse Catholic Media. Hahn is known for his research on Early Christianity during the Apostolic Age and many theoretical works about the early Church Fathers.

Hahn teaches at the Franciscan University of Steubenville, a Catholic university in the United States. He has also lectured at the Pontifical College Josephinum in Columbus, Ohio.

All content from Kiddle encyclopedia articles (including the article images and facts) can be freely used under Attribution-ShareAlike license, unless stated otherwise. Cite this article:
Scott Hahn Facts for Kids. Kiddle Encyclopedia.