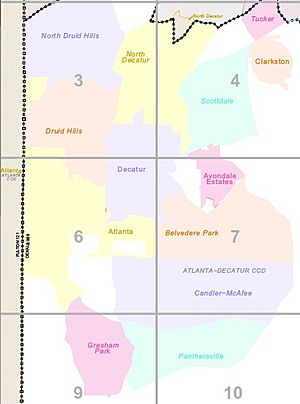 Scottdale is a census-designated place (CDP) in DeKalb County, Georgia, United States. The population was 10,631 at the 2010 census.

According to the United States Census Bureau, the CDP has a total area of 3.5 square miles (9.1 km2), all of it land.

Scottdale is named for Colonel George Washington Scott, who founded the Scottdale Cotton Mill in the late 1800s. Colonel Scott arrived in DeKalb County from Florida, where he had previously owned a plantation, served in the Confederate Army, and unsuccessfully run for governor. Col. Scott was also a benefactor of nearby Agnes Scott College. The Scottdale Cotton Mill development included the mill and nearby housing for workers. From the 1920s through the 1940s, Scottdale Manufacturing Company even supported a baseball team. The mill shut down in 1982, but many workers found jobs elsewhere in metro Atlanta. Philanthropist Tobie Grant donated several acres of property to disenfranchised, unemployed African-Americans and created a community known as Tobie Grant. This community still houses low-income African Americans to this day. Oak Forest Apartments was also opened under this theme in 1968.

All content from Kiddle encyclopedia articles (including the article images and facts) can be freely used under Attribution-ShareAlike license, unless stated otherwise. Cite this article:
Scottdale, Georgia Facts for Kids. Kiddle Encyclopedia.