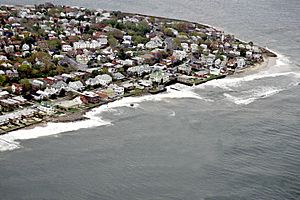 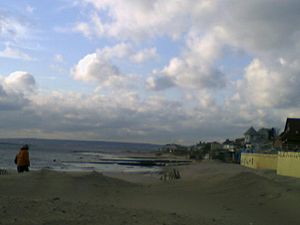 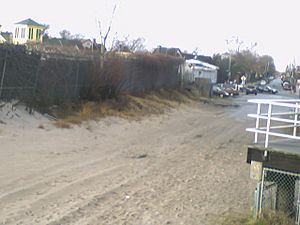 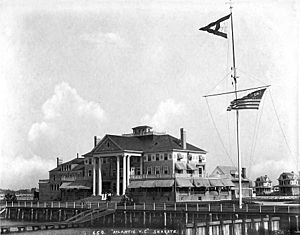 The Atlantic Yacht Club building, which burned down in 1933 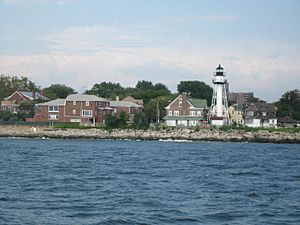 Sea Gate is a private gated community at the far western end of Coney Island at the southwestern tip of the New York City borough of Brooklyn. It contains mostly single-family homes, some directly on Gravesend Bay.

The area that is now Sea Gate was once known as Norton's Point. "Norton" was the name of the owner of a casino, which was situated where the Coney Island Light now stands. The neighborhood held a reputation for gambling before it was developed into a residential neighborhood.

Sea Gate was developed into a full neighborhood in 1892 by developer Alrick Man. By 1899, Sea Gate property owners included the Morgan, Dodge family, and Vanderbilt families. Governor Al Smith and others frequented the Atlantic Yacht Club, whose clubhouse was designed by Stanford White.

Sea Gate is still surrounded on three sides by water with private beaches. In 1995, the Army Corps of Engineers completed its work of replenishing Coney beaches and building new jetties, including a long jetty at the border of Sea Gate and Coney Island.

Residents refer to Sea Gate as "the gate" and venturing into adjoining Coney Island as going "out the gate". There are no stores in the neighborhood. There are express buses to Manhattan, which take an average of 80 minutes. As of 2010[update] Sea Gate is made up of 832 single-family houses in a variety of architectural styles, including Queen Anne Style and Mediterranean.

There are two landmarks in Sea Gate. Located on Beach 47th Street in Sea Gate is the 75-foot-tall (23 m) Coney Island Light, is a lighthouse built in 1890, before the area was populated. The lighthouse is the former home of Frank Schubert, the United States' last civilian lighthouse keeper, who died in 2003. Also, the chapel in Sea Gate, once used for services and built in 1901, is a historical building now used for social events, yoga classes, and is a polling site at election times. The Chapel with its stained-glass windows is the first structure seen when entering the main (police protected) gate.

In addition to large and private beach areas, Sea Gate has two parks:

Sea Gate is largely populated by families living in single- and two-family houses, 54% being rentals. As of 2000, the median age was 38.6 years and the median household income was $41,659. In addition to city and state taxes, residents pay dues and charges to the Sea Gate Association, that have averaged $3,000 per year.

All content from Kiddle encyclopedia articles (including the article images and facts) can be freely used under Attribution-ShareAlike license, unless stated otherwise. Cite this article:
Sea Gate, Brooklyn Facts for Kids. Kiddle Encyclopedia.