Seal of Denver facts for kids 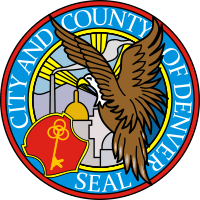 The Seal of the City and County of Denver since 1901

The corporate seal of the City and County of Denver (shown right) was designed by Denver artist Henry Read in 1901. The circular design features an American eagle, reminding us that Denver is a free, American city. The key symbolizes Denver as the key to the Rocky Mountains, and represents the warmth and hospitality extended by Denver citizens to visitors. The capitol dome is included in the seal, as Denver is the capital of the state of Colorado.

The Omaha and Grant Smelter smokestack that were depicted in the seal design was built in 1883, on the east bank of the Platte River. The tall smokestack, built in 1892, was for years the world's tallest structure. It was demolished on February 26, 1950, to clear land for the today's Denver Coliseum. Denver's view of the front range of the Rocky Mountains was shown as a background, with the rays of the setting sun lighting the sky.

All content from Kiddle encyclopedia articles (including the article images and facts) can be freely used under Attribution-ShareAlike license, unless stated otherwise. Cite this article:
Seal of Denver Facts for Kids. Kiddle Encyclopedia.