Seminole Heights is a historic neighborhood and district located in central Tampa. It includes many early 20th century bungalow homes and historic buildings. It was an early residential area of Tampa connected by streetcar. The area had an economic downturn in the late 20th century marked by increased crime, but has since seen a resurgence with new restaurants and independent businesses opening up. The neighborhood's historic homes, eclectic shops and gourmet restaurants are an increasing draw. 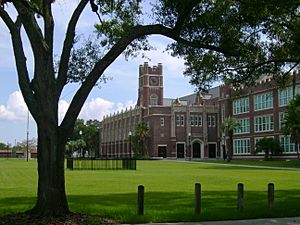 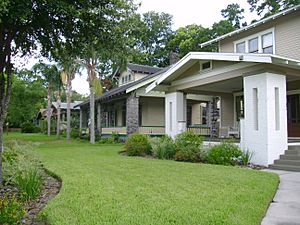 In recent years Seminole Heights has experienced rising property values and a decrease in crime. The area is popular among young professionals and their families who are seeking an alternative to master planned communities. The area contains two designated historical districts including Seminole Heights (local and national designation), Hampton Terrace (national designation).

In 2003, Southeast Seminole Heights was named Best Neighborhood in America by NUSA.

In 2014, Seminole Heights made international headlines when a "local naturalist" sent a picture of a two headed alligator to a local newspaper, who ran the image as its cover story. It was allegedly captured by local trappers and taxidermied for display at Ella's Folkart Cafe. The authenticity of the creature has often come under question as many believe it was a creation inspired by a historical seal depicting a two headed alligator used in early promotional materials for the neighborhood. Since then, it has been the subject of art murals, flags, tee-shirts and other ephemera related to the neighborhood.

In 2016, the creature made news again when the community art project, Urban Art Attack, funded the building of a two headed alligator statue on Nebraska Ave. 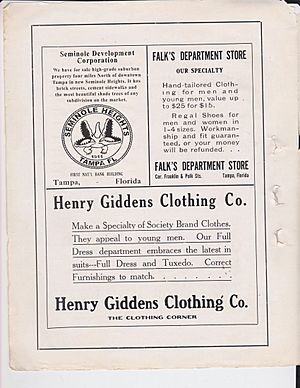 Ten years earlier Tampa's population had reached 26,000. A trolley line connected Sulphur Springs to downtown making travel to the suburbs possible and inviting. The streetcar made it possible to live in one area of town and work in another.

During the "Florida Bloom" years (roughly 1919-1929) more development came to areas north and east of the original subdivisions. Of course, with this development came the merchants seeing an opportunity to provide welcome goods and services to the residents. Some of those early businesses have faded away. However, many current Seminole Heights businesses have been open for more than 50 years.

Schools within Seminole Heights include:

All content from Kiddle encyclopedia articles (including the article images and facts) can be freely used under Attribution-ShareAlike license, unless stated otherwise. Cite this article:
Seminole Heights Facts for Kids. Kiddle Encyclopedia.