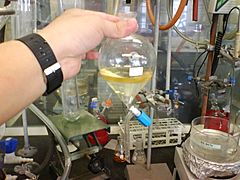 A separating funnel (also called a separation funnel) is a piece of laboratory equipment. It is usually made of glass, and is used to separate two liquids, for example, oil and water. They always separate out, and this is how to remove one from the other:

A separating funnel is a cone shape made from glass but has a half circle, or hemisphere, on top. It has a stopper at the top and tap or hole at the bottom. The size of one can be between 50 millilitres and 3 litres.

All content from Kiddle encyclopedia articles (including the article images and facts) can be freely used under Attribution-ShareAlike license, unless stated otherwise. Cite this article:
Separating funnel Facts for Kids. Kiddle Encyclopedia.