The first noted use of "serendipity" in the English language was by Horace Walpole on 28 January 1754. In a letter he wrote to his friend Horace Mann, Walpole explained an unexpected discovery he had made about a lost painting of Bianca Cappello by Giorgio Vasari by reference to a Persian fairy tale, The Three Princes of Serendip. The princes, he told his correspondent, were "always making discoveries, by accidents and sagacity, of things which they were not in quest of." The name comes from Serendip, an old name for Sri Lanka (Ceylon), hence Sarandib by Arab traders. It is derived from the Sanskrit Siṃhaladvīpaḥ (Siṃhalaḥ, Sri Lanka + dvīpaḥ, island).

The word has been exported into many other languages, with the general meaning of “unexpected discovery” or “fortunate chance”.

The term "serendipity" is often applied to inventions made by chance rather than intent. Andrew Smith, editor of The Oxford Companion to American Food and Drink, has speculated that most everyday products had serendipitous roots, with many early ones related to animals. The origin of cheese, for example, possibly originated in the Nomad practice of storing milk in the stomach of a dead camel that was attached to the saddle of a live one, thereby mixing rennet from the stomach with the milk stored within.

Other examples of serendipity in inventions include: 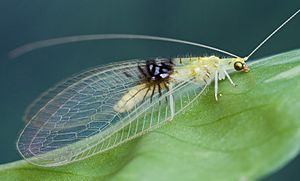 The serendipitous discovery of a new species of lacewing, Semachrysa jade, was made on Flickr

Serendipity contributed to entomologist Shaun Winterton discovering Semachrysa jade, a new species of lacewing, which he found not in its native Malaysia, but on the photo-sharing site Flickr. Winterton's discovery was aided by Flickr's ability to present images that are personalized to a user's interests, thereby increasing the odds he would chance upon the photo. Computer scientist Jaime Teevan has argued that serendipitous discovery is promoted by such personalization, writing that "people don’t know what to do with random new information. Instead, we want information that is at the fringe of what we already know, because that is when we have the cognitive structures to make sense of the new ideas."

Serendipity is a design principle for online activity that would present viewpoints that diverge from those participants already hold. Harvard Law professor Cass Sunstein argues that such an "architecture of serendipity" would promote a healthier democracy. Like a great city or university, "a well-functioning information market" provides exposure to new ideas, people, and ways of life, "Serendipity is crucial because it expands your horizons. You need that if you want to be free." The idea has potential application in the design of social media, information searches, and web browsing.

William Boyd coined the term zemblanity in the late twentieth century to mean somewhat the opposite of serendipity: "making unhappy, unlucky and expected discoveries occurring by design". The derivation is speculative, but believed to be from Nova Zembia, a barren archipelago once the site of Russian nuclear testing.

Bahramdipity is derived directly from Bahram Gur as characterized in The Three Princes of Serendip. It describes the suppression of serendipitous discoveries or research results by powerful individuals.

All content from Kiddle encyclopedia articles (including the article images and facts) can be freely used under Attribution-ShareAlike license, unless stated otherwise. Cite this article:
Serendipity Facts for Kids. Kiddle Encyclopedia.