The Seven Foot Knoll Light was built in 1855 and is the oldest screw-pile lighthouse in Maryland. It was located atop Seven Foot Knoll in the Chesapeake Bay until it was replaced by a modern navigational aid and relocated to Baltimore's Inner Harbor as a museum exhibit. 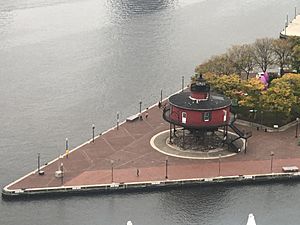 An exterior view showing the technique used to join the iron wall sections.

Constructed of 1-inch (25 mm) rolled iron, the lighthouse consists of three main sections. The gallery deck was located 9 feet (2.7 m) above the average high tide waters. The house was the second section, sitting directly atop the gallery deck. This is where the keeper and his family would live. Atop the housing area was the third section of the lighthouse, the light beacon. A 4th order Fresnel lens was housed in the small light compartment. It was visible for 12 nmi (22 km; 14 mi).

The first requests for a light came in 1848, with initial appropriations in 1851. Delays in planning and bidding pushed the start of construction to 1854. The house consisted of a cylindrical structure of wrought iron plates, with the ninth pile in the center. Total construction costs came to $43,000 by its completion the following year. Most parts were fabricated in Baltimore at the Murray and Hazelhurst iron foundry. The parts were then shipped to Seven Foot Knoll by boat where they were assembled atop of the screw piles. Ice, the perennial threat to screw-pile structures, caused damage in 1884 and 1894, leading to the piling of 790 cubic yards (600 m3) of riprap around the piles. 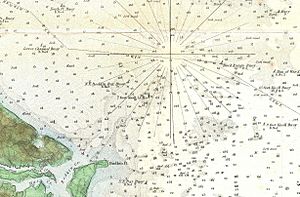 The light was automated in 1949, and fell into disrepair, eventually being supplanted by a skeleton tower. In 1988, the lighthouse was removed from Seven Foot Knoll, carried by a 1000 Ton Capacity Shearleg derrick, and placed ashore in Baltimore's Inner Harbor where it was donated to the city. On August 22, 1989 the lighthouse was listed on the National Register of Historic Places. Aided by the Lady Maryland Foundation (now the Living Classrooms Foundation), many members of the Steinhice family descendants worked to restore the structure prior to its re-opening.

The lighthouse is a contributing element in the Baltimore National Heritage Area and part of the Historic American Engineering Record.

Thomas Jefferson Steinhise (Keeper 1930–1941) assisted in the rescue of a tugboat crew in 1933. The tugboat Point Breeze was then owned by the Curtis Towing Company of Baltimore. She was towing a barge of dredge spoils from Baltimore to Gibson Island on August 20, 1933. The 90 mph (140 km/h) winds and 15 ft (4.6 m)) seas had overcome the tug and the crew abandoned ship. Steinhice took the lighthouse's small motorboat and made his way out in the direction of the tug's distress whistle where he pulled six crew members from the water. Five crew members survived but the engineer perished. Steinhise was awarded the Silver Lifesaving Medal for his actions in saving the lives of the stranded crew. He is buried in Holy Cross Cemetery, Glen Burnie, MD. and his memorial includes a U.S. Lighthouse Service grave-marker.

All content from Kiddle encyclopedia articles (including the article images and facts) can be freely used under Attribution-ShareAlike license, unless stated otherwise. Cite this article:
Seven Foot Knoll Light Facts for Kids. Kiddle Encyclopedia.