Sgùrr nan Eugallt is the highest of a well defined group of mountains that lie south of Loch Hourn, stretching from Barrisdale to Loch Quoich. Although its summit is lower than many nearby neighbours, it is cut off from all its higher neighbours by a ring of deep glens. Despite being in a very wild and remote area, it can be easily ascended from a ruined roadside cottage 4 km to the east of its summit, where there is limited parking space. But the road is single track and the cottage is 20 miles from the nearest main road. Due to its isolation and insufficient height to qualify for Munro's Tables, Sgùrr nan Eugallt is infrequently climbed. 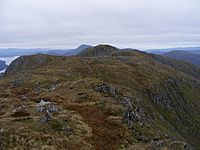 An old stalkers' path from the ruined cottage should guide the climber to a point just below a ridge at about 650 metres. The path was well built in its time but some sections have become wet and slippery. On gaining the ridge, turn left and follow the ridge to the 894 m triangulation point. The ridge becomes steep near the top but the steepest section can be bypassed. Contrary to the implication of the 1:50,000 Landranger map, several websites and the 1990 edition of the Scottish Mountaineering Club publication The Corbetts and other Scottish Hills, the true summit lies about 600 metres to the north west of the triangulation point. List tickers should therefore turn right along the main ridge of the range and continue for about 600 metres to the main summit, which is not shown on any map. About 300 m further along the ridge is an 881 m summit, which is shown on topographic maps.

All content from Kiddle encyclopedia articles (including the article images and facts) can be freely used under Attribution-ShareAlike license, unless stated otherwise. Cite this article:
Sgùrr nan Eugallt Facts for Kids. Kiddle Encyclopedia.