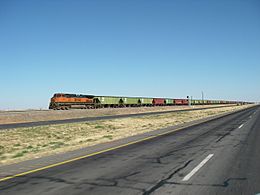 Freight train passing to the northwest of Shallowater: Railroad tracks run parallel to U.S. Route 84 as they cross the level plains of the Llano Estacado.

Shallowater is a city in Lubbock County, Texas, United States. Shallowater is on U.S. Route 84 and the Burlington Northern Santa Fe line, 12 miles (19 km) northwest of Lubbock. Its population was 2,484 at the 2010 census. It is part of the Lubbock metropolitan statistical area.

According to the United States Census Bureau, the city has a total area of 1.5 square miles (4.0 km2), all of it land.

According to the Köppen Climate Classification system, Shallowater has a semi-arid climate, abbreviated "BSk" on climate maps.

As early as 1909 J. C. (Jim) Bowles, whose ranch was adjacent to the site of what is now Shallowater, persuaded Bob Crump, a member of a ranching family, to help form a townsite company and attract a railroad to go through the area. Land was purchased for the townsite on May 18, 1909. A school was built at that time. After Santa Fe railroad officials received a bonus from rancher George W. Littlefield of the Yellow House Ranch, negotiations were finally completed. The originators of the plan, and other interested individuals, formed the Ripley Townsite Company, which was named after a Santa Fe railroad official and was incorporated on May 22, 1909. The company decided to name the new town Shallowater to attract settlers. On June 26, 1913, a celebration was held to note the founding of the town and completion of the railroad. By the time the town was established, the ranching industry in the area was waning and many of the large ranches were being divided into smaller lots for farmers. Cotton became an important cash crop. During the 1920s Shallowater grew rapidly, and the town had a hotel, a lumberyard, and various filling stations, grocery stores, cotton gins, drugstores, barbershops, garages, blacksmith shops, and other businesses. Several churches and schools were also built. A county park with a clubhouse was established, a public well was constructed, and a real depot building was built to replace the boxcar the town had been using for years. From 1920 to 1922 the railroad station was known as Pacita. In 1928 the town had an estimated population of 250. In 1955 Shallowater was incorporated with a mayor-council form of city government, and during the 1960s the town had five churches, a school, a bank, a library, and a newspaper. The community in 1970 had thirty businesses, including one of the largest hatcheries in the county. The population of Shallowater was 1,001 in 1960 and 1,339 in 1970. In the late 1980s Shallowater had a post office, seventeen businesses, and a population of 2,107. It was a farm marketing center with processing and storing facilities. In 2010 the population was 2,484. Class of 2018 is the biggest class in the history of Shallowater.

Shallowater is served by the Shallowater Independent School District, and is home to the 2004 boys and girls state-championship basketball teams.

All content from Kiddle encyclopedia articles (including the article images and facts) can be freely used under Attribution-ShareAlike license, unless stated otherwise. Cite this article:
Shallowater, Texas Facts for Kids. Kiddle Encyclopedia.