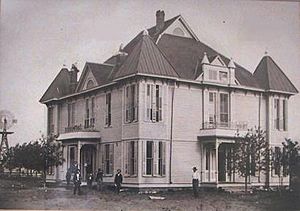 The second Lubbock County Courthouse remained open until 1968, though a third courthouse had been built in 1950.

Lubbock County is a county located in the U.S. state of Texas. The 2020 census placed the population at 310,639. Its county seat and largest city is Lubbock. The county was created in 1876 and organized in 1891. It is named for Thomas Saltus Lubbock, a Confederate colonel and Texas Ranger (some sources give his first name as Thompson).

All content from Kiddle encyclopedia articles (including the article images and facts) can be freely used under Attribution-ShareAlike license, unless stated otherwise. Cite this article:
Lubbock County, Texas Facts for Kids. Kiddle Encyclopedia.