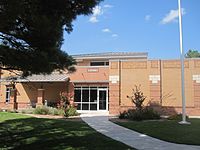 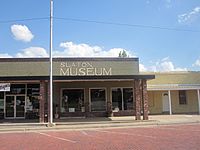 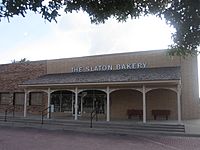 The Slaton Bakery is one of the better-known businesses in the community. 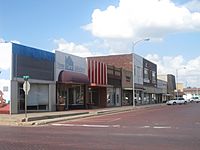 Slaton is a city in Lubbock County, Texas, United States founded by German immigrants. Slaton was the westernmost German settlement in Texas. The population was 6,121 at the 2010 census. Slaton is part of the Lubbock Metropolitan Statistical Area.

According to the Köppen Climate Classification system, Slaton has a semi-arid climate, abbreviated "BSk" on climate maps.

In 1912, the Atchison, Topeka and Santa Fe Railroad, through reorganization now the Burlington Northern Santa Fe, opened a depot in Slaton. Until 1969, the train station offered passengers meals and hospitality through the Fred Harvey Company. The company advertised for "Young women, 18 to 30 years of age, of good moral character, attractive and intelligent, as waitresses in the Havey Eating Houses on the Santa Fe Railroad in the West."

Other ATSF depots were in Amarillo, Brownwood, Gainesville, Temple, El Paso, and Clovis, New Mexico. After the passenger service ended, the railroad used the depot, located at 400 Railroad Avenue, for offices, training rooms, train crew staging areas, and storage, but abandoned the building in the late 1980s. The railroad still passes by the depot. The remaining structure, known as the Harvey House, was marked for demolition, but a citizens' committee launched a nearly two-decade effort to preserve and restore it. The former depot, which calls itself "The Jewel on the Plains", can be rented for parties with catered meals and occasional entertainment options. The upstairs, which was the living quarters of the Harvey girls when it was a restaurant in the early 20th Century, is now a fully operational bed and breakfast. The downstairs hosts a small railroad collection museum. The West Texas Historical Association toured the Harvey House during its 2009 annual meeting in Lubbock.

Art on the Square

Several new art galleries and antique shops are on the square surrounding City Hall. Some are only open limited hours and for special events but several are open for extended hours. Multiplicity Art Gallery opened May 2012 and has art in a diverse range of styles and every price range. This modern gallery is open Thursday, Friday, Saturday 1-5 pm. MAG also plays host to workshops and classes. SouthPaws and the Antique Mall are also open for extended hours. 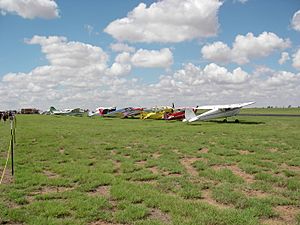 The Caprock Classic Car Club Show and Cruise takes place every third Saturday in July. The annual event showcases classic and refurbished cars and trucks. Set up around the town square, the event includes music, arts and crafts, food and more. visit www.slatonchamberofcommerce.org. The July 4th Festival takes place at the Slaton Park where area musicians perform on an outdoor stage. The park is filled with games, rides food and more. The South Plains Air Show is a bi-annual event taking place the first weekend of June in odd number years. Hosted by the Texas Air Museum Caprock Chapter the show takes place at the Slaton Municipal Airport. Re-enactments and aerobatic performances are scheduled. visit www.thetexasairmuseum.org. The St. Joseph Sausage Fest is put on every October by St. Joseph's Catholic School. The event has been held annually since 1969 and is the school's primary fundraiser. Volunteers make 8,000-9,500 pounds of sausage to sell at the weekend-long event.

The City of Slaton is served by the Slaton Independent School District.

All content from Kiddle encyclopedia articles (including the article images and facts) can be freely used under Attribution-ShareAlike license, unless stated otherwise. Cite this article:
Slaton, Texas Facts for Kids. Kiddle Encyclopedia.