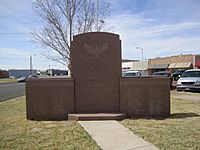 Lynn County was one of 30 prohibition, or entirely dry, counties in Texas, but is now a moist county.

The county has two historical museums, the O'Donnell Heritage Museum, with a Dan Blocker room in O'Donnell, and the Tahoka Pioneer Museum in Tahoka.

Apache and Comanche peoples roamed the high plains until various military expeditions of the 19th century pushed them away.

The Red River War of 1874 was a military campaign to drive out the Apaches, Comanches, and Kiowas in Texas. In 1877, the ill-fated Nolan Expedition crossed the county in search of livestock stolen by Comanche renegades. The various Indian tribes had moved on by the time of white settlement due to the depletion of the buffalo herds by hunters.

In the early 1880s, sheep and cattle ranchers began to set up operations in the county. The situation changed as large-scale ranching spread into the county.

The county remained sparsely settled ranching territory for two decades after 1880. It had no towns; the population was nine in 1880, 24 in 1890, and 17 in 1900. Farmers began to move into the county and invest in corn, grains, and cotton.

Lynn County was formed in 1876 from Bexar. The county was organized in 1903, with Takoha becoming the county seat.

New towns were founded during the early years of the 20th century. O'Donnell, named for railroad man Tom J. O'Donnell, was established in 1910 as a speculative venture based on the opening up of new farmlands in southern Lynn and northern Dawson Counties. Wilson, 13 miles (19 km) northeast of Tahoka, was established in 1912 to attract farmers to the newly opened lands of the Dixie Ranch. A large number of Central Texas Germans purchased county lands, thus beginning a small-scale migration of Germans into the county that lasted into the 1950s.

Cotton farming prospered in the early part of the 20th century. Farmers later expanded to wheat and sorghum, plus cattle, sheep, hogs, and poultry, chiefly chickens and turkeys.

All content from Kiddle encyclopedia articles (including the article images and facts) can be freely used under Attribution-ShareAlike license, unless stated otherwise. Cite this article:
Lynn County, Texas Facts for Kids. Kiddle Encyclopedia.