Kids Encyclopedia Facts
Not to be confused with Wilson County, Texas. 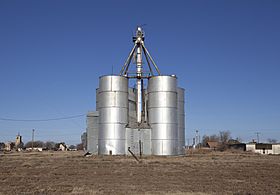 Grain silos on the south side of Wilson.

Wilson is a small rural city in the northeastern quadrant of Lynn County, Texas, United States.

In 1917, William Green built the "Green Building" that housed a mercantile store that quickly became the center of activity in this small town. The couple most involved in operating the store were Mr. and Mrs. J.T. Williams, who managed the store from 1916 to 1936, when Mr. Williams died. Mrs. Williams continued to manage the store for another few years until the early 1940s. In 1963, the citizens of Wilson celebrated the renovation of the Green Building and, today, the refurbished building serves as City Hall, historical museum, and continues to be a community gathering spot.

In 1923, Wilson, with only twenty residents, was among thirty-seven communities that applied to become the home of the new Texas Tech University, which was instead located to the north in Lubbock. Wilson offered the choice of six thousand acres for the institution, three times the amount required in the legislation authored by State Senator William H. Bledsoe of Lubbock, whose district included Lynn County. The institution could have picked any arrangement of land without disturbing any individual or even moving a fence.

There were 182 households out of which 39.6% had children under the age of 18 living with them, 62.1% were married couples living together, 9.9% had a female householder with no husband present, and 23.1% were non-families. 19.8% of all households were made up of individuals and 8.2% had someone living alone who was 65 years of age or older. The average household size was 2.92 and the average family size was 3.41.

All content from Kiddle encyclopedia articles (including the article images and facts) can be freely used under Attribution-ShareAlike license, unless stated otherwise. Cite this article:
Wilson, Texas Facts for Kids. Kiddle Encyclopedia.