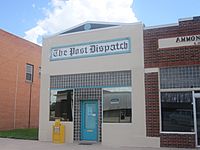 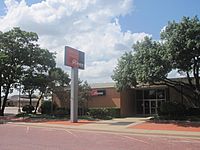 Garza County is a county located in the U.S. state of Texas. As of the 2020 census, its population was 5,816. Its county seat is Post. The county was created in 1876 and later organized in 1907. Garza is named for a pioneer Bexar County family, as it was once a part of that county.

Giles McCrary, a leading civic figure in Garza County, was until his death in 2011 a rancher, oil developer, investor, and art collector. McCrary's OS Museum is a popular attraction in Post, which has made an extended effort to attract tourism.

Republican Drew Springer, Jr., a businessman from Muenster in Cooke County, has since January 2013 represented Garza County in the Texas House of Representatives.

All content from Kiddle encyclopedia articles (including the article images and facts) can be freely used under Attribution-ShareAlike license, unless stated otherwise. Cite this article:
Garza County, Texas Facts for Kids. Kiddle Encyclopedia.