Abernathy is a city in Hale and Lubbock counties in the U.S. state of Texas. The population was 2,805 at the 2010 census.

According to the United States Census Bureau, the city has a total area of 1.2 square miles (3.2 km2), all land. 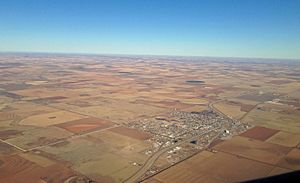 The Santa Fe Railroad wanted to follow a straight line from Plainview to Lubbock. A straight-line survey was run and it went east of the present site of Abernathy. This route did not please the residents of Hale Center, which had been established since the 1890s. They influenced the Santa Fe to come southwest out of Plainview to serve them, and from there the Santa Fe followed an approximate straight line into Lubbock.

The developers of the town sites along the new railroad wanted to organize a town on a section 4 miles (6 km) north of the present town of Abernathy. The owners, who lived in Wisconsin, were contacted. They thought there might be gold on the land and refused to sell. Therefore, the last section south in Hale County was chosen as the town site.

Originally owned by John Y. Ligon, the section that was to become the Abernathy town site was purchased by J.C. Roberds from E.S. and W.L. Stanfield. When the South Plains Investment Company was formed by Roberds, Dr. M.C. Overton, and Monroe Abernathy, Mr. Roberds deeded the section to the firm and became the president of the firm. Dr. Overton was secretary and Mr. Abernathy was treasurer.

On June 18, 1909, the official survey of the town site was recognized by Gov. T.M. Campbell. The town site was platted on July 8, 1909, and was named for M.C. Abernathy. Mr. Monk was the resident agent for the company, and a small frame office building was built. Lots and blocks were sold from there.

Since there were already several buildings in Bartonsite and none in Abernathy, the founding fathers here contracted with J.J. Barton to move some of the buildings to Abernathy. In the late summer of 1909 the move began. Buildings were placed on rollers. The latest equipment—steam-driven tractors—hooked on. The exodus began to huff and puff toward the new town. The tractors did not move but about three or four miles per hour, so it was a long trip. A two-story yellow hotel, a lumberyard, blacksmith shop, and three or four residences were some of the approximately ten buildings moved.

The first train came to Abernathy in the early fall of 1909. This was not a regular train, but some cars added to the work train. It was a great day for all the settlers in the area.

The depot was constructed in 1909. C.E. Stout was the first local agent for the Santa Fe.

The section where the town of Abernathy was being developed was fenced, and gates had to be opened when entering and leaving town. The streets and block corners were laid off with 2 x 4 stubs. These stubs denoted streets for the next few years, until a grader finally came in to run ditches.

Town residents had free range on the section, and their milk cows and horses and mules were turned loose to graze. The stock would stray out of the section, and range cattle would come into town, when someone happened to leave the gates open. The ladies had to stand guard at their clotheslines to keep the livestock from ruining their laundry. When a load of feed was brought to town, the cattle and horses had to be chased away until it was unloaded in stack lots or barns. Trains running through the town section frequently hit the livestock.

Behind most of the houses were outhouses, barns, and windmills. Nearly every home had its own windmill, although a few families hauled water. Generally, gardens and cow lots were integral parts of each household.

Abernathy is featured in the Branson musical 3 Redneck Tenors as the home of Billy Ray, "The Dead Tenor". A funeral is held for Billy Ray in Abernathy, "The Gateway to Lubbock".

All content from Kiddle encyclopedia articles (including the article images and facts) can be freely used under Attribution-ShareAlike license, unless stated otherwise. Cite this article:
Abernathy, Texas Facts for Kids. Kiddle Encyclopedia.