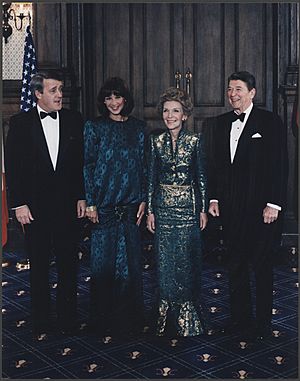 Brian Mulroney with Ronald Reagan and Nancy Reagan in 1985

The Shamrock Summit was a summit meeting that took place in Quebec City, Quebec, Canada during March 1985. It was a meeting between Prime Minister of Canada Brian Mulroney and President of the United States Ronald Reagan.

All content from Kiddle encyclopedia articles (including the article images and facts) can be freely used under Attribution-ShareAlike license, unless stated otherwise. Cite this article:
Shamrock Summit Facts for Kids. Kiddle Encyclopedia.