Kids Encyclopedia Facts
Not to be confused with Shaw Islands. 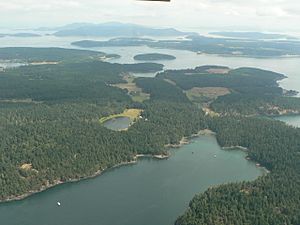 Most of the southern half of Shaw Island (looking to the east), with the much smaller Canoe Island immediately past it, then Lopez Island most prominent in the background 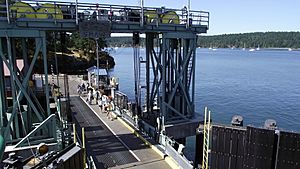 The ferry dock at Blind Bay. This terminal has a native Orca petroglyph carving sign unlike the other San Juans with the generic island name signs 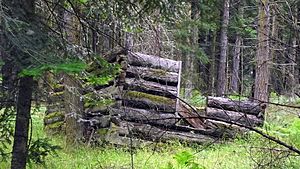 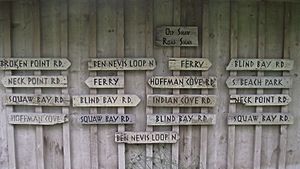 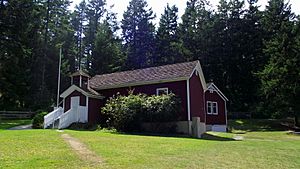 Shaw Island is the smallest of the four San Juan Islands served by the Washington State Ferries. The island has a land area of 19.952 square kilometres (7.704 square miles) and a small year-round population of 240 (2010 census). Summer time weekends swell with other residents and the occasional tourist. The Wilkes Expedition, in 1841, named the island after John Shaw, a United States Naval Officer.

Shaw Island has a County park, a historic general store, and a post office at the ferry landing. A library and museum are located near the middle of the island.

The University of Washington also owns property throughout the island, notably the Cedar Rock Reserve on the south side of the island. The stated vision for these properties are "to maintain and restore native biodiversity and ecosystem function and to facilitate education and research that is consistent with these goals" and "to maintain important parts of the cultural landscape."

Shoreline access is best at the Shaw County Park. There are 11.5 miles (18.5 km) of asphalt and 2.37 miles (3.81 km) of gravel public roads on Shaw. The primary roads are three loops in the interior of the island, with branches to the ferry dock, Shaw Island County Park, Neck Point, and Broken Point.

There are three Catholic religious institutes of nuns on Shaw Island. Benedictine nuns established a monastery on 150 acres (61 hectares) in the 1970s; while the Sisters of Mercy have owned an unofficial retreat on the island since the 1980s. Nuns of the Franciscan Sisters of the Eucharist ran the island's only store and the ferry terminal for almost 3 decades, until 2004.

Shaw Island has an operational historic one-room school (although a second room was later added), with classes for elementary and middle school students. Known as the Little Red Schoolhouse, it has been in continuous use since it was built in 1890 and is the longest- running school in the state of Washington. The building is listed on the U.S. National Register of Historic Places.

Shaw Island also has a small library and historical museum.

Shaw Island was featured during the fifth-season episode "Access" of the political drama The West Wing as the site of a standoff between terrorist suspects and the US government, similar to the Waco, Texas Branch Davidian standoff.

All content from Kiddle encyclopedia articles (including the article images and facts) can be freely used under Attribution-ShareAlike license, unless stated otherwise. Cite this article:
Shaw Island Facts for Kids. Kiddle Encyclopedia.