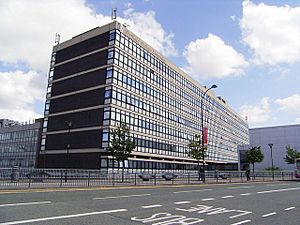 Sheffield Hallam University (SHU) is a public research university in Sheffield, South Yorkshire, England. It is based on two sites; the City Campus is located in the city centre near Sheffield railway station, while the Collegiate Crescent Campus is about two miles away in the Broomhall Estate off Ecclesall Road in south-west Sheffield.

In 1843 as the industrial revolution gathered pace and Sheffield was on the verge of becoming the steel, tool and cutlery making capital of the world, the Sheffield School of Design was founded following lobbying by artist Benjamin Haydon. The day-to-day running was controlled by the local council, whilst the Board of Trade in London appointed the head. Tuition began in a 60x40ft rented room off Glossop Road. In 1850 the School of Design was renamed Sheffield School of Art.

In 1905 the City of Sheffield Training College (later renamed Sheffield City College of Education) on Collegiate Crescent admitted its first 90 students. During the First World War, the Collegiate Hall was requisitioned by the War Office to create the 3rd Northern General Hospital, a facility for the Royal Army Medical Corps to treat military casualties.

In 1992 Sheffield City Polytechnic became Sheffield Hallam University (SHU), with the right to award its own degrees.

In 2005 SHU was reorganised into four faculties. The new Faculty of Development and Society, with an emphasis on 'people, places and spaces', brought together education, geography, humanities, law, and social sciences. At the same time, with the intention of further developing research and teaching in the new Faculty of Health and Wellbeing, a new Clinical Academic Group was launched. The building that had been designed and constructed to house the National Centre for Popular Music became the university's students' union building (the HUBS). The Nelson Mandela Building, the former students' union building (when opened in 1978 was known as the Phoenix building), was sold and has since been demolished.

In 2007 SHU took over the teaching of nursing and midwifery from the University of Sheffield. These activities are now based at the Collegiate Crescent Campus. The following year the Psalter Lane campus (formerly the Sheffield College of Art) was closed, and the activities transferred to the City Campus. The £26 million energy-efficient Furnival Building opened in September (renamed Cantor Building in 2011 in recognition of a major donor to the university). The building, which includes teaching spaces and an art gallery has been described as "the impressive new entry point to the campus". 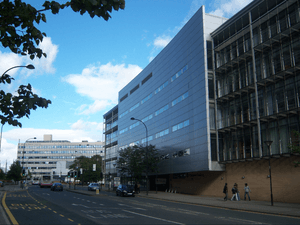 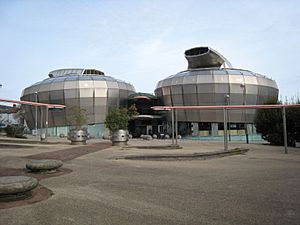 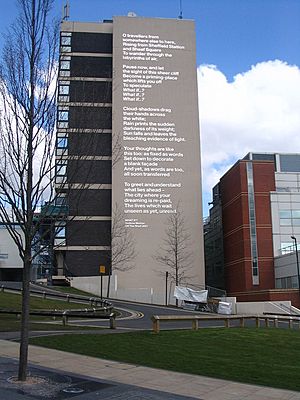 What If? Poem on the side of Owen Building

In 2020, the University relaunched its structure moving away from four faculties and re-organising academic departments into colleges.

College of Business, Technology and Engineering (BTE)
Formerly known as the Sheffield Business School and prior to that the Faculty of Organisation and Management (OM)

College of Health, Wellbeing and Life Sciences (HWLS)
Formerly the Faculty of Health and Wellbeing (HWB)

Through the research centres a number of spin-off companies have been formed, including:

British barrister, broadcaster, and life peer of the House of Lords Helena Kennedy was installed as Chancellor in a ceremony at Cutlers' Hall on Thursday 26 July 2018.

In the National Student Survey, several subject areas at SHU have performed very well in terms of overall student satisfaction with their courses: for example, architecture and geography have both been placed first, and planning has been placed second.

Hallam received a First Class award and was ranked 15th out of 151 universities in the People & Planet University League 2015 which assesses universities on their environmental credentials. In 2020, the University was awarded The Times and Sunday Times University of the Year award for teaching quality. 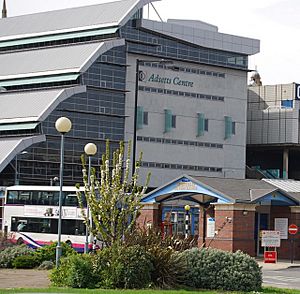 All content from Kiddle encyclopedia articles (including the article images and facts) can be freely used under Attribution-ShareAlike license, unless stated otherwise. Cite this article:
Sheffield Hallam University Facts for Kids. Kiddle Encyclopedia.