The dish can vary widely within its basic definition, whether as a home recipe or on a restaurant menu. The defining ingredients are minced meat (beef for cottage pie, lamb or mutton for shepherd's pie) cooked in a gravy with onions and sometimes vegetables, such as peas, celery or carrots, and topped with mashed potato. Whilst not traditional, a common addition to either pie is to top the mashed potato with grated cheese. 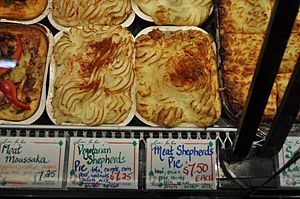 Shepherd's pie in a market

The term cottage pie was in use by 1791, when the potato was being introduced as an edible crop affordable for the poor (cf. "cottage" meaning a modest dwelling for rural workers). The term shepherd's pie did not appear until 1854, and is sometimes used synonymously with cottage pie, regardless of whether the principal ingredient is beef or mutton. In the United Kingdom, the term shepherd's pie is typically used when the meat is lamb.

In early cookery books, the dish was a means of using leftover roasted meat of any kind, and the pie dish was lined with mashed potato as well as having a mashed potato crust on top.

& In The Netherlands, a similar dish, sometimes with apples, is called a 'Filosoof' (Philosofer).

All content from Kiddle encyclopedia articles (including the article images and facts) can be freely used under Attribution-ShareAlike license, unless stated otherwise. Cite this article:
Cottage pie Facts for Kids. Kiddle Encyclopedia.