The Shubert Theatre is a Broadway theatre located at 225 West 44th Street in Midtown Manhattan.

Designed by architect Henry Beaumont Herts, it was named after Sam S. Shubert, the second oldest of the three brothers of the theatrical producing family. It shares a Venetian Renaissance facade with the adjoining Booth Theatre, which was constructed at the same time, although the two have distinctly different interiors. The two theatres are connected by a private road/sidewalk, "Shubert Alley". It opened on October 2, 1913 with Hamlet, starring Sir John Forbes-Robertson, followed by the October 21, 1913 opening of the George Bernard Shaw play, Caesar and Cleopatra, staged by the Forbes-Robertson Repertory Company.

The theatre has also been a recurring venue for the Tony Awards.

The top floor of the building houses the offices of the Shubert Organization. The theatre's auditorium and murals were restored in 1996. It has been designated a New York City landmark. 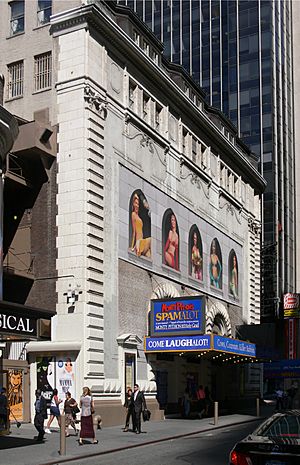 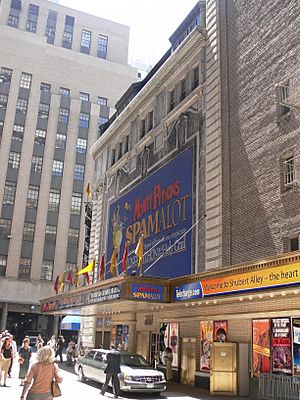 All content from Kiddle encyclopedia articles (including the article images and facts) can be freely used under Attribution-ShareAlike license, unless stated otherwise. Cite this article:
Shubert Theatre (New York City) Facts for Kids. Kiddle Encyclopedia.