The eight letters 'OUOSVAVV', framed by the letters 'DM'

The Shugborough Inscription is a sequence of letters – O U O S V A V V, between the letters D M – carved on the 18th-century Shepherd's Monument in the grounds of Shugborough Hall in Staffordshire, England, below a mirror image of Nicolas Poussin's painting the Shepherds of Arcadia. It has never been satisfactorily explained, and has been called one of the world's top uncracked ciphertexts. 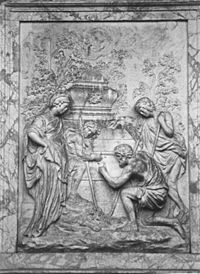 The Shugborough relief, adapted from Nicolas Poussin's second version of The Shepherds of Arcadia 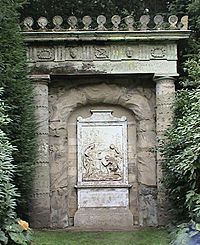 The Shepherds Monument, enclosed in its rustic arch 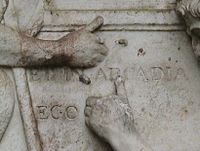 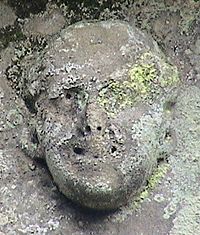 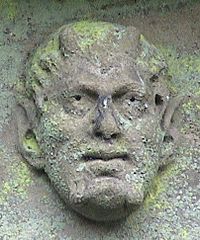 The monument, commissioned by Thomas Anson, was built sometime between 1748 and 1756. The outer form of the monument is a portico featuring two doric columns. These support an entablature decorated by a frieze comprising three metopes depicting laurel wreaths, and two containing carvings of stone heads. One head shows a smiling bald-headed man; the other bears a likeness to the goat-horned Greek god Pan. The entablature is topped with an antefix using an anthemion design.

Inside the portico is a rusticated arch, which frames a relief fashioned by the Flemish sculptor Peter Scheemakers. The relief is a copy of the Poussin painting Et in arcadia ego and shows a woman and three men, two of whom are pointing to a tomb. On the tomb is carved the Latin text Et in arcadia ego ("I am also in Arcadia" or "I am, even in Arcadia"). The carving displays a number of small alterations from the original painting, including the addition of an extra sarcophagus placed on top of the main tomb. Below the relief is a stone plaque displaying a ten-letter inscription. The inscription is broken into two lines. There are eight letters on the first line, and two below on the second line, placed at either end of the letters on the first line. The letters on the second line, D M, were commonly used on Roman tombs to stand for Dis Manibus, meaning "dedicated to the shades".

In recent decades, investigators have proposed several possible solutions. Despite the many theories, staff at Shugborough Hall remain sceptical of all proposed solutions. A spokesman for the property (now owned by the National Trust) was quoted in 2014 asserting, "We get five or six people a week who believe they have solved the code so we are a bit wary of them now."

All content from Kiddle encyclopedia articles (including the article images and facts) can be freely used under Attribution-ShareAlike license, unless stated otherwise. Cite this article:
Shugborough inscription Facts for Kids. Kiddle Encyclopedia.