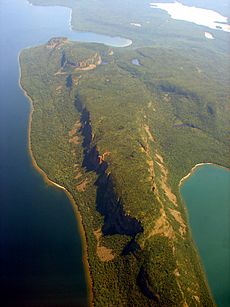 Aerial view of the Sleeping Giant, the southernmost part of Sibley Peninsula

The Sibley Peninsula is a 52 kilometres (32 mi) long and 10 kilometres (6 mi) wide peninsula in Ontario, Canada, on Lake Superior. It projects into the lake from Superior's north shore, and separates Thunder Bay to the west from Black Bay to the east.

The peninsula can be separated into two physiographic areas—highlands and lowlands. The highlands dominate the western half of the peninsula, and rise to 380 metres (1,247 ft) above the surface of Lake Superior. The lowlands of the eastern portion of the peninsula rise to only 75 metres (246 ft), over an area 3 to 6 kilometres (2 to 4 mi) wide. With the exception of diabase dikes and the large diabase sill that forms the upper portion of the Sleeping Giant, the peninsula is underlain by sedimentary rocks, which strike northeast and slope towards the southwest, forming a cuesta.

All content from Kiddle encyclopedia articles (including the article images and facts) can be freely used under Attribution-ShareAlike license, unless stated otherwise. Cite this article:
Sibley Peninsula Facts for Kids. Kiddle Encyclopedia.