Siege and Battle of Corinth Sites facts for kids

The Siege and Battle of Corinth Sites are a National Historic Landmark District encompassing surviving elements of three significant American Civil War engagements in and near Corinth, Mississippi. Included are landscape and battlefield features of the Siege of Corinth (April 29 to June 10, 1862), the Second Battle of Corinth (October 3-4, 1862), and the lesser Battle of Hatchie's Bridge on October 5, 1862. The district includes features located in both Alcorn County, Mississippi and Hardeman County, Tennessee, with some of the former preserved as part of Shiloh National Military Park. It was designated a landmark in 1991. 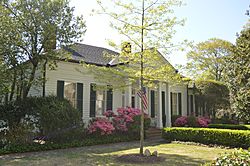 The city of Corinth grew as a railroad town in the 1850s around the railroad crossing point of the Memphis and Charleston Railroad (opened 1857) and the Mobile and Ohio Railroad (opened 1861). This railroad junction, whose planning began in the mid-1850s, made Corinth a key economic junction point in the southern United States, and made it of critical military importance when the American Civil War broke out. Following the bloody Union victory at Shiloh in early April 1862, Confederate forces withdrew to Corinth, which they heavily fortified with earthworks and other defenses, in order to protect the critical railroad lines. The month-long Siege of Corinth followed, in which Union forces again compelled the Confederates to retreat. Confederate reinforcements from the west made an attempt to recapture Corinth in the Second Battle of Corinth, but were repulsed with significant casualties. During their retreat, the Confederates were attacked in the Battle of Hatchie's Bridge, near Pocahontas, Tennessee, by Union forces headed to support those at Corinth.

The landmark district includes a number of discontiguous resources associated with these military movements and actions. Most of these are located in or near Corinth, and include earthworks, rifle pits, and other defensive features erected both by the Confederates (before the siege) and also the Union (after its capture). A few buildings occupied by military commanders are included, as is the actual railroad junction that was the key element of interest.

The following National Register listings are also related to the military actions in some way, but are not part of the landmarked area:

All content from Kiddle encyclopedia articles (including the article images and facts) can be freely used under Attribution-ShareAlike license, unless stated otherwise. Cite this article:
Siege and Battle of Corinth Sites Facts for Kids. Kiddle Encyclopedia.