Siege of Orleans facts for kids 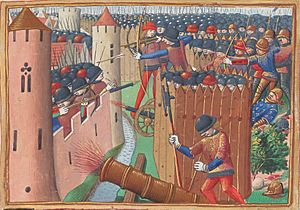 The Siege of Orleans.

The Siege of Orleans (1428 – 1429) was an important event in the Hundred Years' War between France and England. This was Joan of Arc's first success and the first big success for the French since the Battle of Agincourt in 1415.

The city of Orleans was at an important place on the river Loire. The English controlled large parts of France when they started the siege, and Orleans was the last thing stopping them from attacking the rest of France. There was not much south of the river to defend the people who served Charles VII of France, so the English came close to joining their northern lands in France with the land they controlled at Aquitaine.

The siege started on October 12, 1428 and its only major action until Joan of Arc arrived was the Battle of the Herrings. She initiated several attacks that ended the siege on May 8, 1429 - nine days after her arrival.

All content from Kiddle encyclopedia articles (including the article images and facts) can be freely used under Attribution-ShareAlike license, unless stated otherwise. Cite this article:
Siege of Orleans Facts for Kids. Kiddle Encyclopedia.