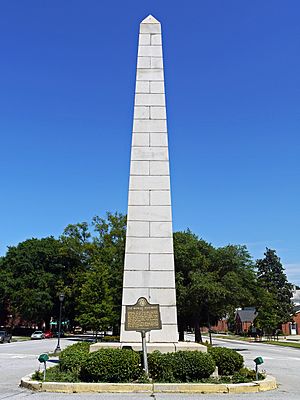 The monument is located on the 500 block of Greene Street in front of the Augusta Municipal Center, which was in 1848 the location of the City Hall. It is a granite obelisk, twelve feet square at the base and tapering to a height of fifty feet. It was originally surrounded by a substantial iron railing. A marble slab is inserted in its southern face, on which are engraved in alto-relievo the coat of arms of Georgia and the names, Button Gwinnett, Lyman Hall, and George Walton. It was designed by Robert French and dedicated in 1848.

It was the intention of the public-spirited citizens who built it to bury beneath the foundation stones of the monument the remains of the Founding Fathers whose joint memories it was designed to perpetuate. A committee was appointed to open the graves and superintend the removal and the reburial of the bones of these men.

In the case of Lyman Hall, this was not difficult. His tomb on his plantation in Burke County was well marked and his remains easily identified.

The committee had trouble locating the grave of George Walton. Although the place of his grave was remembered by some of the older locals, no stone marked the precise spot in the family burying ground at Rosney plantation, some nine miles from Augusta. A careful search was successful. The right femur still gave evidence of when Colonel Walton was shot through the thigh, fell from his horse, and was captured by the enemy, in December, 1778 during Colonel Archibald Campbell's assault upon, and capture of, Savannah.

The remains of Hall and Walton were removed from their respective graves and reburied in the earth beneath the monument.

It proved impossible to find the bones of Button Gwinnett. He had died in Savannah in 1777 of a wound inflicted by General Lachlan McIntosh during a duel with pistols at the short distance of four paces. It was generally believed that Gwinnett had been buried in the old cemetery on South Broad Street in Savannah, but no gravestone could be found, and there was no one left alive to point out his unmarked grave.

When completed, the obelisk was dedicated with a ceremony, which took place on July 4, 1848. Judge William T. Gould pronounced the oration, and the Masonic ceremonies were conducted by the Honorable William C. Dawson, Grand Master of the Georgia lodge.

Gwinnett was born an Englishman, Hall was a native of Connecticut, and Walton was born a Virginian. Georgia, however, proudly claims them as her adopted sons, and the city of Augusta by this memorial testifies, in enduring form, her grateful appreciation of their services in the cause of her freedom.

All content from Kiddle encyclopedia articles (including the article images and facts) can be freely used under Attribution-ShareAlike license, unless stated otherwise. Cite this article:
Signers Monument Facts for Kids. Kiddle Encyclopedia.