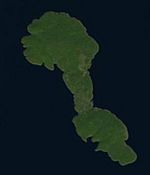 Silba is an island in Croatia. It is found between the islands of Premuda and Olib. It has an area of 15 km² and its population (as of 2001) was 265; with the village of Silba located at the narrowest point in the middle. The main administrative centre is Zadar, found on the mainland.

All content from Kiddle encyclopedia articles (including the article images and facts) can be freely used under Attribution-ShareAlike license, unless stated otherwise. Cite this article:
Silba Facts for Kids. Kiddle Encyclopedia.