Sissonville is a census-designated place (CDP) in Kanawha County, West Virginia, United States, along the Pocatalico River. The population was 4,028 at the 2010 census. Sissonville is located within 14 miles of Charleston, the state capital.

Sissonville is located in Kanawha County, West Virginia. It was named after an early settler by the name of John Sisson. History shows the first known settler north of Fort Lee (now known as Charleston) was a man named Johnson who built a log cabin near the mouth of Tuppers Creek in 1802 and later built a grist mill in the area. The community was named for John Sisson, who owned the original townsite.

The Sissonville area also includes the areas known as Cicerone, Pocatalico, Millertown, and Guthrie. There are numerous other smaller communities within these including Kanawha Two Mile, Derrick's Creek, Second Creek, Allen's Fork, and Kelly's Creek. The community runs from the city limits of Charleston on the southern end, North to the Jackson County line, East to Roane County, and West to Putnam County. The area covered by the Sissonville Volunteer Fire Department is just over 125 square miles. The fire department was founded in May 1961.

The Sissonville community has an extensive history of experiencing problems with flooding. The community suffered three National Disaster floods in 1998, 1999, and 2000. The flooding in 2000 claimed three lives when a boat belonging to the Charleston Fire Department capsized during a rescue attempt in the 2900 Block of Sissonville Drive. The history of flooding in the area was the impetus for the closing of Bonham Elementary School located along Kanawha Two Mile.

In October 2001, the Katie Sierra suspension controversy made national news when a Sissonville High School student was reportedly suspended for her activism in opposition to the bombing of Afghanistan. She was actually suspended for distributing flyers for a club against school policy without prior authorization.

On December 11, 2012 at 12:41 p.m. a 26-inch natural gas pipeline belonging to Columbia Gas Transmission exploded near the intersection of Route 21 and Derricks Creek Road. The resulting explosion and fire destroyed several homes and a wall of flame destroyed an over 800 foot long section of Interstate 77 just south of the Sissonville Exit, Exit 114. Firefighters had to rescue one occupant who had taken shelter behind her home. Despite the massive destruction, no serious injuries were reported and there was no loss of life.

The 2013 reality-television series Buckwild was filmed in Sissonville. Set to premiere January 3, 2013, on MTV, it features four Sissonville young adults, six others from surrounding areas. One member of the show, Shain Gandee, died after his Ford Bronco got stuck in the mud. He and two others died of carbon monoxide poisoning. He was twenty-one.

Many people erroneously believe "Sissonville" encompasses all of the area north of the City of Charleston along State Route 21 and Interstate 77, but the area comprises four communities: Guthrie, Pocatalico, Millertown, and Sissonville.

The largest employer in the Sissonville area is the NGK Spark Plugs (U.S.A.) Inc. Manufacturing facility located near the Sissonville-Pocatalico Exit of Interstate 77. The facility employs over 400 full-time workers manufacturing spark plugs and oxygen sensors.

The West Virginia Department of Agriculture's Gus R. Douglass Agricultural Center is located on Gus R. Douglas Lane off Guthrie Rd / Fishers Branch Rd in the Guthrie area of the community. The facility houses animal health labs and one of the Department's Regional Response Teams for dealing with agricultural emergencies. 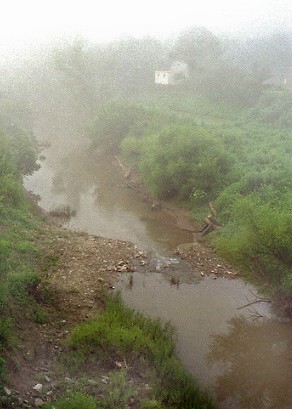 The Pocatalico River at Sissonville on a foggy morning

There is a branch of the Kanawha County Public Library in the Pocatalico community.

The Sissonville Volunteer Fire Department has hosted an annual Fire & Rescue School since 2007. The school is designed to provide practical, hands-on training to first responders in all phases of emergency response. The event has grown into the largest public safety training event in the State of West Virginia having trained just over 800 first responders from nine states during the 2014 school.

All content from Kiddle encyclopedia articles (including the article images and facts) can be freely used under Attribution-ShareAlike license, unless stated otherwise. Cite this article:
Sissonville, West Virginia Facts for Kids. Kiddle Encyclopedia.