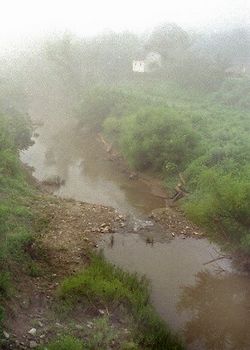 The Pocatalico River at Sissonville on a foggy morning

The Pocatalico River is a tributary of the Kanawha River, about 75 mi (120 km) long, in west-central West Virginia in the United States. Via the Kanawha and Ohio Rivers, it is part of the Mississippi River watershed.

The Pocatalico rises in Roane County near the community of Walton and flows generally southwestwardly through southern Roane, northern Kanawha and southeastern Putnam Counties, past the community of Sissonville. It meets the Kanawha River at the town of Poca.

The Pocatalico River and its watershed experienced severe flooding in March 1997, June 1998, and February 2001. The floods in 1997 and 1998 resulted in National Disaster declarations. The communities of Walton, Cicerone, Sissonville, and Millertown were most seriously impacted.

Pocatalico is a name derived from a Native American language meaning "river of fat doe".

The United States Board on Geographic Names settled on "Pocatalico River" as the stream's name in 1907. According to the Geographic Names Information System, it has also been known historically as:

All content from Kiddle encyclopedia articles (including the article images and facts) can be freely used under Attribution-ShareAlike license, unless stated otherwise. Cite this article:
Pocatalico River Facts for Kids. Kiddle Encyclopedia.