Six Mile Run is an unincorporated community and census-designated place (CDP) located in Franklin Township, in Somerset County, New Jersey, United States. As of the 2010 United States Census, the CDP's population was 3,184.

There were 1,152 households out of which 37.8% had children under the age of 18 living with them, 53.8% were married couples living together, 12.1% had a female householder with no husband present, and 28.8% were non-families. 22.7% of all households were made up of individuals, and 4.7% had someone living alone who was 65 years of age or older. The average household size was 2.76 and the average family size was 3.31.

Historic district on the National Register of Historic Places

Six Mile Run is the historic name for an unincorporated community located within portions of North Brunswick Township and South Brunswick Township in Middlesex County and Franklin Township in Somerset County, in New Jersey. Route 27 (historically known as Old Road/King's Highway and once part of the Lincoln Highway system) bisects the village and serves as the dividing line between the two counties. The name of the settlement was formally changed from Six Mile Run to Franklin Park on June 25, 1872. 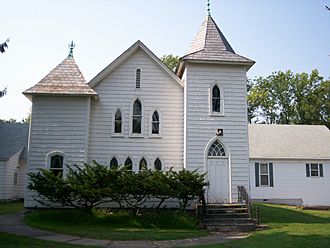 In 1710, a congregation of the Dutch Reformed Church (now the Reformed Church in America) formed the Six Mile Run Reformed Church. The first building was replaced by a new building in 1766 and was later replaced in 1817 by a third structure on the same site. The current building replaced the 1817 church that was destroyed by fire in 1879. The Frelinghuysen Memorial Chapel was added in 1907 and the Fellowship Hall was dedicated in 1958.

The proposed Six Mile Run Reservoir Site is adjacent to the Delaware and Raritan Canal and included a large portion of the Six Mile Run Watershed in central Franklin Township. In 1970, the land for the reservoir was acquired by the State through the New Jersey Department of Environmental Protection, Division of Water Resources as a future reservoir and recreation area and included many of the properties later listed as contributing to the Six Mile National Register Historic District. The reservoir was never built, and in 1993 administration of the area was transferred to the Division of Parks and Forestry.

Today the Six Mile Run Reservoir site is maintained as a State Park and includes several trails that are used primarily by mountain bikers, hikers, and horseback riders. It has 8 miles (13 km) of twisting single track maintained by JORBA. Access to the park can be found at the large parking lot on Canal Road near Six Mile Run Road, from the parking lot of the private soccer club on Route 27, and from several smaller parking areas on roads that traverse the park.

All content from Kiddle encyclopedia articles (including the article images and facts) can be freely used under Attribution-ShareAlike license, unless stated otherwise. Cite this article:
Six Mile Run, New Jersey Facts for Kids. Kiddle Encyclopedia.