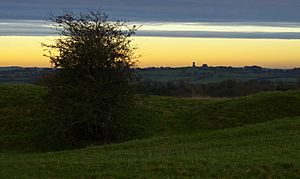 Skryne Church viewed at sunset from the Hill of Tara.

A monastery named Achall (after the legendary Achall) was on this site at an earlier date. The shrine of Columba (Colm Cille) or maybe some of his relics, was brought here in the 10th century for safe keeping, so it acquired the name Scrín Choluim Chille (Colmcille's Shrine; from Latin scrīnium). The monastery was plundered at least six times by various raiders, but it continued to run even after the Norman conquest of Ireland. Adam de Feypo, first Baron Skryne, founded a church dedicated to Nicholas of Myra and endowed it upon his brother Thomas, who joined the Cistercians of St. Mary's Abbey, Dublin. St Mary's held Skryne up until the Dissolution of the Monasteries in 1534.

Skryne Church was built in 1341 as a house of Augustinians by Francis de Feypo, the last de Feypo Baron Skryne. The tower was added in the 15th century.

The church is a nave and chancel with mural stairs to a rood screen and an arched tomb recess. A carving of a man is near the door, possibly Colm Cille. The bell tower is three storeys high and has a base-batter. It contains fragments of a baptismal font and a tomb slab. A medieval cross stands nearby.

All content from Kiddle encyclopedia articles (including the article images and facts) can be freely used under Attribution-ShareAlike license, unless stated otherwise. Cite this article:
Skryne Church Facts for Kids. Kiddle Encyclopedia.