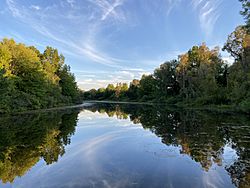 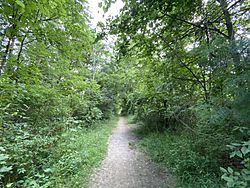 A hiking and horse trail runs along parts of the perimeter of the lake.

Sleepy Hollow State Park is a public recreation area covering 2,678 acres (1,084 ha) in the townships of Ovid and Victor in Clinton County, Michigan. The state park is located off US-127 nine miles southeast of St. Johns and four miles northwest of Laingsburg and centers around man-made, 410-acre (170 ha) Lake Ovid.

The park was created through a series of land acquisitions in the late 1960s followed by the damming the Little Maple River to create Lake Ovid. The state opened the park in 1976. In 2009, the 18-Hole Legend Disc Golf course was introduced.

At 412 acres (167 ha), Lake Ovid is the largest body of water in the surrounding area. The lake's fish species include catfish, black crappie, largemouth bass, muskellunge, sunfish, yellow perch, and other freshwater species — bluegill, northern pike, bowfin, brown bullhead, carp, white sucker, pumpkinseed, and yellow bullhead. The lake is stocked with muskellunge and channel catfish. Migrating waterfowl, shorebirds and passerines are drawn to Lake Ovid, and more than 228 bird species have been recorded in the park.

The park's recreational features include swimming, boating and fishing on Lake Ovid (enforced as a "no wake" lake), 11 miles of trails for hiking, biking and cross-country skiing, six miles of equestrian trails, picnicking facilities, disc golf, and areas for hunting, snowmobiling, and camping.

Sleepy Hollow provides 181 campsites shared between their North and South campgrounds. All campsites are accommodated with electricity and close access to safe drinking water.

The park has 181 modern campsites, split up between the North and South campgrounds. Reservations can be made online or over call. The camping season ranges from June until October, but also offers winter camping. These campsites have close access to electricity and water.

There is also access to other means of overnight stay, including a modern and rustic cabin, rustic walk-in campsites, and an organizational campground.

All content from Kiddle encyclopedia articles (including the article images and facts) can be freely used under Attribution-ShareAlike license, unless stated otherwise. Cite this article:
Sleepy Hollow State Park Facts for Kids. Kiddle Encyclopedia.