Beaufortia micrantha, commonly known as small-leaved beaufortia or little bottlebrush, is a plant in the myrtle family, Myrtaceae and is endemic to the south-west of Western Australia. It is a compact shrub with tiny leaves pressed against the stems and profuse heads of purple or pinkish-coloured flowers.

Beaufortia micrantha is a small, compact shrub which grows to a height of about 0.5 metres (2 ft). The leaves are triangular in shape with the end tapering to a point, 1–2 millimetres (0.04–0.08 in) long and have their upper surfaces pressed against the stems, sometimes overlapping each other. The leaves of Beaufortia empetrifolia are similar in size and shape but are not pressed against the stems to the same extent. 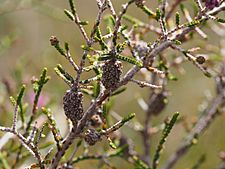 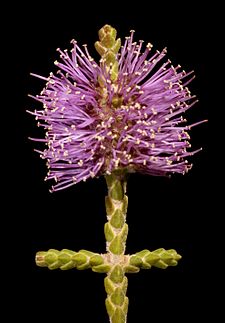 Beaufortia micrantha mainly occurs in and between the Esperance, Albany, Corrigin and Southern Cross districts in the Avon Wheatbelt, Coolgardie, Esperance Plains, Jarrah Forest and Mallee biogeographic regions. It usually grows in sandy soils derived from laterite on plains and ridges.

Beaufortia micrantha is classified as "not threatened" by the Western Australian Government Department of Parks and Wildlife.

All content from Kiddle encyclopedia articles (including the article images and facts) can be freely used under Attribution-ShareAlike license, unless stated otherwise. Cite this article:
Small-leaved beaufortia Facts for Kids. Kiddle Encyclopedia.