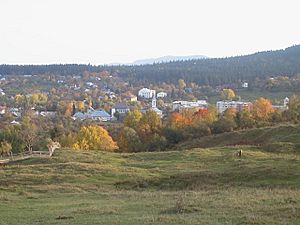 View of the town, from the northern hill

Solca is a town in Suceava County, north-eastern Romania. It is situated in the historical region of Bukovina. Solca is the smallest town in the county and the third smallest town in Romania, with a population of 2,143 inhabitants, according to the 2011 census. Its name is derived from that of the river flowing through it, in turn derived from Slavic sol ("salt") – in reference to the area's salty springs. Solca is known for its high quality air, for being a former spa and for the beer that was manufactured here.

Solca is located in the central-eastern part of Suceava County, at the foot of the eastern part of Obcina Mare Mountains, in Solca-Cacica Depression. The town is situated at the border of Suceava Plateau and the Eastern Carpathians, at an average altitude of 522 metres. Solca River crosses the town. Solca is a place known for the beauty of the natural landscape and the high quality of its air.

The town is celebrated for its monumental Romanian Orthodox church, the former Sts. Peter and Paul's Monastery (1613–1623), also knowns as Solca Monastery, built by Voievod (Ruling Prince) Ștefan Tomșa II of Moldavia and closed by the Habsburgs in 1785, and a beer factory that ranks among the oldest in the country (1810). Salt springs are located in the northern forested area. Solca is also relatively close to the Cacica salt mine and the Arbore church.

In Solca there is a Romanian traditional house which dates from the 17th century. This house was transformed in museum in 1971. Other points of interest are the motel (known as Hanul Solca), the sanatorium with the summer garden, the central park, Tomşa Vodă High School, the Roman Catholic Church (which dates from 1868) and Pietrele Muierilor (a monument of nature located near the town).

Despite the fact it has the status of a town, Solca has a rural aspect in many areas of its. During the Communist regime, there were built around 10 apartment blocks along the two main roads that cross the town: Tomșa Vodă Street and Republicii Street. Solca isn't connected to the Romanian national railway system.

The town administered the village of Poieni-Solca. Following a local referendum held in August 2004, Poieni-Solca was split from the town of Solca in March 2007 and became a commune.

All content from Kiddle encyclopedia articles (including the article images and facts) can be freely used under Attribution-ShareAlike license, unless stated otherwise. Cite this article:
Solca Facts for Kids. Kiddle Encyclopedia.