Suceava is the largest city and the seat of Suceava County, situated in the historical region of Moldavia, north-eastern Romania, and at the crossroads of Central and Eastern Europe respectively. During the late Middle Ages, more specifically from 1388 to 1564, the city was the third capital of the Principality of Moldavia.

Between 1775 and 1918, Suceava was the third most populous urban settlement of the Duchy of Bukovina (German: Herzogtum Bukowina), a constituent province of the Austrian Empire and subsequently a crown land within Austria-Hungary, being solely surpassed by Cernăuți (German: Czernowitz) and Rădăuți (German: Radautz), both located to the north. Furthermore, thanks to its diverse ethnic background during the Modern Age, Austrian architect Rudolf Gassauer stated that the city of Suceava could have well been perceived as a 'miniature Austria'.

Consequently, all throughout this period of time, Suceava fulfilled the task of an important, strategically-located commercial border town with the then Romanian Old Kingdom (German: Altreich), receiving a large influx of German-speaking settlers in the process of the Josephine colonization (German: Josephinisches siedlung), a community which has since dwindled to a very feeble number to the present day.

After 1918, along with the rest of Bukovina, Suceava became part of the then newly enlarged Kingdom of Romania. After 1945, the city slowly underwent a process of forced Communist urbanization which had tremendously increased its population (about tenfold) throughout the decades which preceded the 1989 revolution. 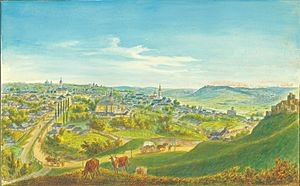 Artist's impression of the city Suceava from 1867 by Austrian painter Franz Xaver Knapp. 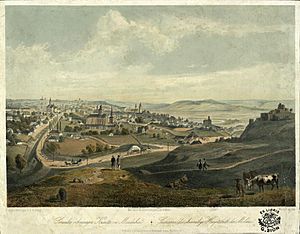 Artist's impression of the city of Suceava from 1870 by Austrian painter Franz Xaver Knapp.

The present-day territory of the city of Suceava and the adjacent surroundings were already inhabited since the Paleolithic period. Stemming from the late Antiquity, there are also traces of Dacian oppidum of the 2nd century.

In stark contrast to several historical regions of Romania (most notably Transylvania and Oltenia), Suceava (along with the entire region of Bukovina for that matter) was not conquered by the legions of the Roman Empire and consequently was one of the lands of the Free Dacian tribes during the late Ancient Age. Nonetheless, according to Ptolemy, at that time in the region also dwelled two likely Celtic-speaking tribes, specifically the Anartes and the Taurisci, as well as the Germanic Bastarnae, who have also been attested there.

After the fall of Rome and during the Migration Period, the predominantly Carpiani population was successively invaded by East Germanic peoples (such as the Goths or the Gepids), Huns, Slavs, Magyars, Pechenegs, and ultimately Cumans. During the Late Middle Ages, the city of Suceava was the capital of the Principality of Moldavia and the main residence of the Moldavian princes for nearly two centuries (namely between 1388 and 1564).

The city was the capital of the lands of Stephen the Great, one of the pivotal figures in Romanian history, who died in Suceava in 1504. During the rule of Alexandru Lăpușneanu, the seat was moved to Iași in 1565 and Suceava failed to become the capital again. Michael the Brave captured the city in 1600 during the Moldavian Magnate Wars as he became the ruler of Wallachia, Moldavia, and Transylvania, but he was defeated the same year. 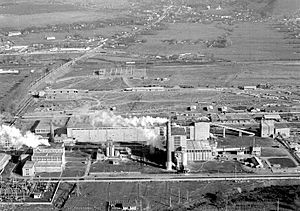 Suceava valley industrial platform, bird's-eye view taken at some point during the 1960s.

Together with the rest of Bukovina (German: Buchenland), Suceava was under the rule of the Habsburg Monarchy (and, later, the Austrian Empire as well as Austria-Hungary) from 1775 to 1918 (with the border of the Habsburg domains passing just south-east of the city). During the late 19th century and early 20th century, the city was the third largest in the Duchy of Bukovina, after Cernăuți and Rădăuți.

At the end of World War I, it became part of Greater Romania. Throughout the interwar period, the city of Suceava (as it was concomitantly the case of the whole historical region of Bukovina) undergone further infrastructural development within the then enlarged Kingdom of Romania. It had also briefly belonged to Ținutul Suceava (between 1938 and 1940), one of the 10 lands established during King Carol II of Romania's reign.

Subsequently, from the 1950s onwards (along with the onset of Communism), Suceava was heavily industrialized and a significant series of historical buildings from its old city centre were demolished in order for Plattenbau-like blocks of flats to be constructed at the orders of the Communist officials.

Arable land near the city of Suceava, as seen from above.

The city covers two types of geographical areas, the hills (of which the highest is Zamca Hill) and the meadows of the Suceava river valley. The unique setting of the urban settlement includes two groves, Zamca and Șipote, which are both located within the city limits. Burdujeni, one of the neighbourhoods, is connected to the rest of the city by a prominent avenue, which makes the neighbourhood appear to be a separate satellite town.

In 1910, when the city was still under imperial Austrian administration, the total population amounted to 10,955 inhabitants. Of those, 61.5% declared their native language was German (i.e. Hochdeutsch), followed by Romanian with 25.38% and Ruthenian (or Ukrainian) with 5.46%.

20 years later, when the city switched to royal Romanian administration, the 1930 census recorded a population which amounted to c. 17,000 inhabitants with the following ethno-linguistic composition:

According to the 2011 census data, Suceava had a population of 92,121, a decrease from the figure recorded at the 2002 census (106,138), making it the 23rd largest city in Romania at that time. Additionally, the ethnic composition was as follows:

All content from Kiddle encyclopedia articles (including the article images and facts) can be freely used under Attribution-ShareAlike license, unless stated otherwise. Cite this article:
Suceava Facts for Kids. Kiddle Encyclopedia.