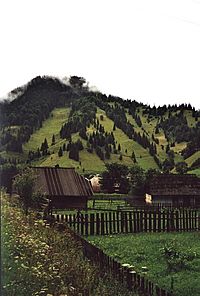 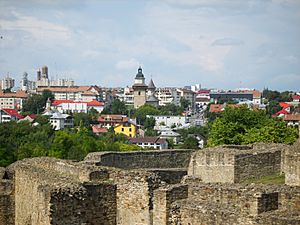 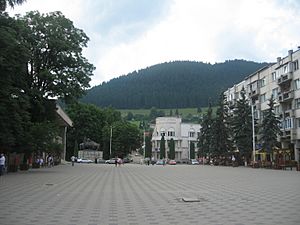 Suceava is a county (judeţ) of Romania in the historical regions Moldavia and Bukovina. The capital of Suceava County is Suceava.

The west side of the county has many mountains from the Eastern Carpathians group. These are the Rodna Mountains, the Rarău Mountains, the Giumalău Mountains and the three "Obcine". The county is lower in the east, with the lowest point in the Siret River valley.

These are the nationalities of the people who live in Suceava County.

This is how the population of Suceava County has changed over the last 60 years.

The predominant industries in the county are:

There are also metals that are mined in the mountains.

All content from Kiddle encyclopedia articles (including the article images and facts) can be freely used under Attribution-ShareAlike license, unless stated otherwise. Cite this article:
Suceava County Facts for Kids. Kiddle Encyclopedia.