Somebody Else's Prince facts for kids

"Somebody Else’s Prince" belongs to a collection of short stories, named The Other Side of the Sun, written by Evelyn Sharp (1869–1955) in 1900. Other stories in this collection include: The Weird Witch of the Willowherb, The Magician's Tea-Party, The Hundredth Princess, The Tears of Princess Prunella, The Palace on the Floor, The Lady Daffodilia, and The Kite That Went to the Moon.

Evelyn Sharp (1869–1955) was a key figure in two of the major women’s suffrage societies in Britain: the militant Women’s Social and Political Union, and the United Suffragists. She helped to found the latter and became editor of Votes for Women during the First World War. She was twice imprisoned and became a tax resister. An established author who had published in The Yellow Book, she was especially well known for her children’s fiction.

A King and a Queen have 5 children: four sons, and one daughter. The five children have five gardens that are all lined up in a row. The daughter’s name is Princess Gentianella and her garden is the most extravagant out of the five. Her garden lies at the end of the row with a stonewall surrounding it. The King and the Queen built the wall higher whenever the princess grew to prevent her from seeing over it. They thought it clever and wise to prevent the young princess form seeing the world that lay on the other side of her garden.

As the four princes grew up they left their gardens. The youngest of the 4 princes, Prince Hyacinth, came and said goodbye to his young sister when it was his turn to leave. Princess Gentianella was very upset since she would now have to play in the gardens all by herself, but her brother tried to cheer her up saying, “but perhaps, if you wait long enough, some other prince will come into your garden, and then you can ask him to play with you.”.

To her surprise, the Princess finds another garden on the other side of her wall. As she looks at this garden she discovers that there is also a Prince. His name was Prince Amaryllis and he belongs to the Kingdom that lay on the other side of Princess Gentianella's wall. Prince Amaryllis is glad to see someone but he doesn't know how it is possible. The Prince’s Kingdom is invisible to the eyes of other countries. His Kingdom had become invisible when the Prince’s great-grandfather forgot to ask the Witch to dance with him. This gesture had offended the Witch and she experimented with the country turning it invisible. The reason why Prince Amaryllis was working in the garden was because he was trying to disenchant his kingdom. A King’s son must spend a full year in this garden and try to make the flowers grow. If he fails he is sentenced to death.

The Prince comes over the wall into the Princess’s garden in hope of her showing him how to grow a beautiful garden. They spend their days walking around and talking about many things. Even after the day was over and the Prince would go back over the wall, they would remember more things that they forgot to talk about. The days passed and they would always play in the Princess’s garden since it was a nicer garden than the Prince’s. 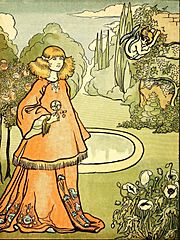 Princess Gentianella soon gets over her anger at Prince Amaryllis. The Prince still had failed to grow flowers in his garden. The Princess runs out the next morning to re-patch her friendship with her Prince. To her great astonishment the Prince was not on the other side of the wall. The Princess calls his name but she receives no answer. The Princess then jumps down into the Prince’s garden. She still can't see the invisible country but she could hear the voices of its citizens. “'Our Prince cannot make the flowers grow, and the Witch has taken him away to be executed,' was what they were saying.”.

Once Princess Gentianella hears what the citizens are saying, she drops down and starts to cry. Wherever her tears landed, flowers began to grow. She exclaims her excitement and the wymp reappears on the wall. She could hear the voices of the kingdom shouting their excitement at the sudden flowers in the garden. The wymp pointed out that now Prince Amaryllis can now marry Anemone, the Witch’s beautiful daughter. The Princess is once again saddened by the news, but the wymp reassures her.“'Don't you fret about that, my little dear,' he cried. 'Do you suppose the Witch’s daughter wants anybody else’s Prince, either?' Princess Gentianella clapped her hands with delight. 'Of course she doesn't!' she cried. 'But perhaps she does not know he is somebody else’s Prince.'".

The Princess decides to find her prince and runs towards the invisible kingdom. “She ran and she ran and she ran, until the Prince's kingdom was really obliged to stop being invisible, for in all the hundred years that it had been bewitched no one had ever tried so hard to see it before. Besides, it would have been most impolite of anybody's kingdom to go on pretending that it was not there, when the Princess was so determined to pretend that it was…”. The Princess meets various characters along the way, including a lamb, a woodcutter, a fish, a sea-serpent and an old woman, whom aid her in her journey after they are warmed by her kindness. She tells everyone that she meets that the Prince will not be marrying Princess Anemone.

During her travels through the invisible kingdom, the Princess stumbles through a landscape of every season, apparently because “it is no use being particular about the time of year when there is no one to see what kind of weather you are having”. The Princess meets the old woman, who is running an experiment to see if there is anyone who is so brave of heart that the thistles do not hurt them. The Princess helps to pick thistles which cannot bear to hurt so gentle of hands as hers. As she continues, she meets a beautiful girl in the woods who is crying bitterly because her mother wants her to marry a prince when she is already somebody else’s Princess. The Princess tells her that she is in a similar situation. It turns out that the beautiful girl is the witch’s daughter, Anemone, who is in love with the Princess’ brother, Hyacinth.

Anemone is worried because she has just sent Hyacinth to kill Prince Amaryllis, but the Princess is not concerned because: "nobody could possibly be strong enough to kill my Prince, and as for Hyacinth, he will be quite safe, for Prince Amaryllis is much too nice to hurt anyone”. The Princess is proven to be right as the two princes arrive arm in arm. When the Witch arrives (who is also the old woman that the little Princess met in the field) she is furious, but she is soon calmed by the little princess’ manner and everyone ends up with what they want. The witch retires to be a “nice old lady” and Prince Amaryllis and Princess Gentianella return to their gardens where they knock down the wall and turn it into one garden.

Princess Gentianella: Princess Gentianella is as small, fair, lovely, and as kind as a princess can be. She is so lovely that the whole world loves her and the sun and the fairies helped to make her flowers grow. She is curious and expects big things from the world. She is not afraid the save herself (rather than depending on a prince). She falls in love with Prince Amaryllis

Prince Amaryllis: A forgetful prince who cannot grow flowers, but who is strong and kind. He falls in love with Princess Gentianella.

Prince Hyacinth: The youngest of Gentianella’s three older brothers. He falls in love with Princess Anemone.

The Witch/the Old Woman: The Witch is always doing experiments and everyone fears her. She has a temper, but likes being thought of as a nice old woman. She is warmed by Princess Gentianella's kindness and retires from being a mean witch.

The King and Queen: The King and Queen think that they are protecting Princess Gentianella from the evils of the world by building the wall around her garden but in truth they do not really understand her (although the Queen does a slightly better job at understanding the Princess than the King).

All content from Kiddle encyclopedia articles (including the article images and facts) can be freely used under Attribution-ShareAlike license, unless stated otherwise. Cite this article:
Somebody Else's Prince Facts for Kids. Kiddle Encyclopedia.