Hyacinthus is a small genus of bulbous, spring-blooming perennials. They are fragrant flowering plants in the family Asparagaceae, subfamily Scilloideae and are commonly called hyacinths. The genus is native to the area of the eastern Mediterranean from the north of Bulgaria through to the northern part of Israel

Several species of Brodiaea, Scilla, and other plants that were formerly classified in the lily family and have flower clusters borne along the stalk also have common names with the word "hyacinth" in them. Hyacinths should also not be confused with the genus Muscari, which are commonly known as grape hyacinths.

Hyacinthus grows from bulbs, each producing around four to six linear leaves and one to three spikes or racemes of flowers. In the wild species, the flowers are widely spaced with as few as two per raceme in H. litwinovii and typically six to eight in H. orientalis which grows to a height of 15–20 cm (6–8 in). Cultivars of H. orientalis have much denser flower spikes and are generally more robust.

The genus name Hyacinthus was attributed to Joseph Pitton de Tournefort when used by Carl Linnaeus in 1753. It is derived from a Greek name used for a plant by Homer, ὑάκινθος (hyákinthos), the flowers supposedly having grown up from the blood of a youth of this name accidentally killed by the god Zephyr. The original wild plant known as hyakinthos to Homer has been identified with Scilla bifolia, among other possibilities. Linnaeus defined the genus Hyacinthus widely to include species now placed in other genera of the subfamily Scilloideae, such as Muscari (e.g. his Hyacinthus botryoides) and Hyacinthoides (e.g. his Hyacinthus non-scriptus).

Hyacinthus was formerly the type genus of the separate family Hyacinthaceae; prior to that the genus was placed in the lily family Liliaceae.

Three species are placed within the genus Hyacinthus:

Some authorities place H. litwonovii and H. transcaspicus in the related genus Hyacinthella, which would make Hyacinthus a monotypic genus.

The Dutch, or common hyacinth of house and garden culture (H. orientalis, native to southwest Asia) was so popular in the 18th century that over 2,000 cultivars were grown in the Netherlands, its chief commercial producer. This hyacinth has a single dense spike of fragrant flowers in shades of red, blue, white, orange, pink, violet or yellow. A form of the common hyacinth is the less hardy and smaller blue- or white-petalled Roman hyacinth of florists. These flowers need indirect sunlight and should be watered moderately.

Some members of the plant subfamily Scilloideae are commonly called hyacinths but are not members of the genus Hyacinthus and are edible; one example is the tassel hyacinth, which forms part of the cuisine of some Mediterranean countries. 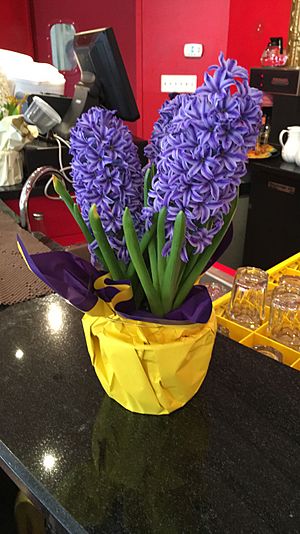 Hyacinths are often associated with spring and rebirth. The hyacinth flower is used in the Haft-Seen table setting for the Persian New Year celebration, Nowruz, held at the Spring Equinox. The Persian word for hyacinth is سنبل (sonbol).

The hyacinth appears in the first section of T.S. Eliot's The Waste Land during a conversation between the narrator and the "hyacinth girl" that takes place in the spring.

“You gave me hyacinths first a year ago;
“They called me the hyacinth girl.”
—Yet when we came back, late, from the Hyacinth garden,
Your arms full, and your hair wet, I could not
Speak, and my eyes failed, I was neither
Living nor dead, and I knew nothing,
Looking into the heart of light, the silence.

In Roman Catholic tradition, the hyacinth represents prudence, constancy, desire of heaven and peace of mind; and is derived from the story of Hyacinthus, upon whose death the flower sprang forth.

The color of the blue flower hyacinth plant varies between 'mid-blue', violet blue and bluish purple. Within this range can be found Persenche, which is an American color name (probably from French), for a hyacinth hue. The color analysis of Persenche is 73% ultramarine, 9% red and 18% white.

All content from Kiddle encyclopedia articles (including the article images and facts) can be freely used under Attribution-ShareAlike license, unless stated otherwise. Cite this article:
Hyacinth (plant) Facts for Kids. Kiddle Encyclopedia.