Somerset is an incorporated town in Montgomery County, Maryland, United States, located near its border with Washington, D.C. The population was 1,216 at the 2010 census. Somerset has no relationship to Somerset County, some 150 miles distant.

According to the United States Census Bureau, the town has a total area of 0.28 square miles (0.73 km2), all of it land.

There were 407 households, of which 44.5% had children under the age of 18 living with them, 76.2% were married couples living together, 6.6% had a female householder with no husband present, 2.5% had a male householder with no wife present, and 14.7% were non-families. 10.8% of all households were made up of individuals, and 8.1% had someone living alone who was 65 years of age or older. The average household size was 2.99 and the average family size was 3.18.

Somerset's history dates back to 1890, when five government scientists purchased 50 acres (20 ha) parcel of tobacco farmland from the government for the purpose of setting up a residential community. This land was originally part of the Friendship Tract, a 1713 gift of 3,000 acres (12 km2) to a couple of early Maryland colonists which is now the basis for the nearby Friendship Heights area. Five early streets were arranged and remain to this day: Dorset, Warwick, Surrey, Cumberland, and Essex after the English counties. The first home in Somerset was occupied by Dr. Charles A. Crampton in 1893, and by 1905 there were 35 residences.

Despite being promoted as an area of "tranquility and refinement," the original Town was plagued by inadequate water drainage, a makeshift sewage system, and the absence of local fire protection and schools. These problems prompted the local citizens to petition the State of Maryland for incorporation into a township so that taxes could be levied to provide these basic services. The Charter was issued in 1906, forming the community of Somerset Heights and the surrounding areas into the Town of Somerset. The first Town Council was elected on May 7, 1906, and Dr. Crampton was elected as the first mayor.

In 1988, town residents voted in a referendum to de-annex a parcel of land containing three large apartment buildings under construction, to avoid having the town council and services shift from representing the single-family homeowners to becoming representative of a condo community. Residents of the Somerset House complex would have out-numbered the single-family home dwellers by 3–1. The complex was constructed on the last large undeveloped woodlot in Somerset, and construction had been blocked by legal challenges for over two decades.

Residents are zoned to: 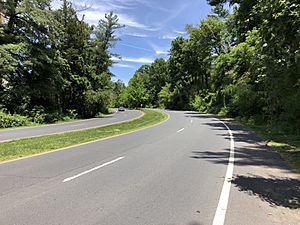 All content from Kiddle encyclopedia articles (including the article images and facts) can be freely used under Attribution-ShareAlike license, unless stated otherwise. Cite this article:
Somerset, Maryland Facts for Kids. Kiddle Encyclopedia.