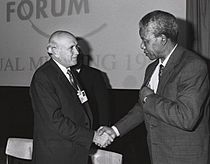 Millions of people were in lines over a three-day voting period. 19,726,579 votes were counted and 193,081 were rejected as invalid. As required by the Interim Constitution, the ANC formed a Government of National Unity with the National Party and the Inkatha Freedom Party, the two other parties that won more than twenty seats in the National Assembly.

The date 27 April is now a public holidays in South Africa. It is known as Freedom Day.

All content from Kiddle encyclopedia articles (including the article images and facts) can be freely used under Attribution-ShareAlike license, unless stated otherwise. Cite this article:
South African general election, 1994 Facts for Kids. Kiddle Encyclopedia.