South Run (also known as South Run Creek) is a tributary of Bowman Creek in Wyoming County, Pennsylvania, in the United States. It is approximately 2.5 miles (4.0 km) long and flows through Monroe Township. The watershed of the stream has an area of 3.42 square miles (8.9 km2). It is not designated as an impaired waterbody. The surficial geology in the vicinity of the stream consists of alluvium, alluvial terrace, and Wisconsinan Till. Its watershed is designated as a High-Quality Coldwater Fishery and a Migratory Fishery. 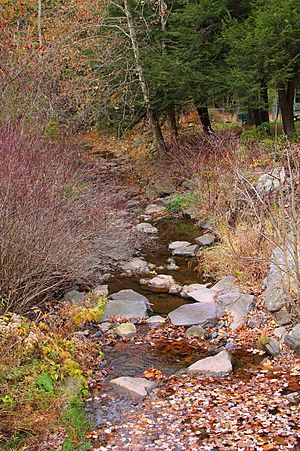 South Run is not designated as an impaired waterbody.

The surficial geology of the land adjacent to South Run mainly consists of alluvium. However, large areas of a till known as Wisconsinan Till also occur in the stream's watershed. A patch of alluvial terrace occurs near its mouth.

There is a spring in the watershed of South Run. The spring's source is "somewhat diffuse" and it is located at the headwaters of a rill that flows into South Run.

The watershed of South Run has an area of 3.42 square miles (8.9 km2). The stream is entirely within the United States Geological Survey quadrangle of Noxen.

Some farmstead land infringes upon the 100-year floodplain of South Run in Monroe Township. 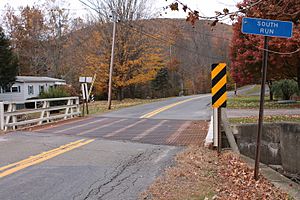 The watershed of South Run is designated as a High-Quality Coldwater Fishery and a Migratory Fishery. Wild trout naturally reproduce in the stream from its headwaters downstream to its mouth.

All content from Kiddle encyclopedia articles (including the article images and facts) can be freely used under Attribution-ShareAlike license, unless stated otherwise. Cite this article:
South Run (Bowman Creek tributary) Facts for Kids. Kiddle Encyclopedia.