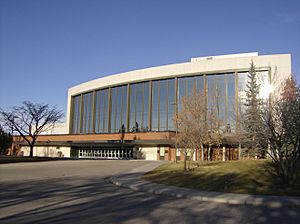 The auditorium was built in 1955 to celebrate the 50th anniversary of Alberta. It is owned and operated by the Government of Alberta.

The Jubilee is home to Calgary Opera, Alberta Ballet, and the annual Canadian Legion Remembrance Day Ceremonies. For many years it has hosted touring Broadway shows, stand-up comedians, theatre productions, bands, orchestras, dance festivals and awards ceremonies. Other tenants include Broadway Across Canada.

In 2005 as part of the celebrations for the Alberta Centennial, the auditorium underwent extensive renovations totalling $91 million.

The main theatre capacity to up 2,538 people on three levels and is famous for state of the art acoustics.

All content from Kiddle encyclopedia articles (including the article images and facts) can be freely used under Attribution-ShareAlike license, unless stated otherwise. Cite this article:
Southern Alberta Jubilee Auditorium Facts for Kids. Kiddle Encyclopedia.