Southern Railway 4501 is a class "Ms" 2-8-2 "Mikado" type steam locomotive built in October 1911 by the Baldwin Locomotive Works of Philadelphia, Pennsylvania as the first of its wheel arrangement type to be built for the Southern Railway. In 1948, the locomotive was retired from the Southern in favor of dieselization and was sold to the shortline Kentucky and Tennessee Railway (K&T) in Stearns, Kentucky to haul coal trains.

When the K&T was dieselized in 1964, No. 4501 was purchased by a railfan named Paul H. Merriman with $5,000 of his own money and brought to Chattanooga. Shortly thereafter it was returned to steam for excursion service on the Southern Railway's steam program managed by the railroad's president W. Graham Claytor Jr. through Merriman’s 4501 Corporation. In 1979, the locomotive was added to the National Register of Historic Places. Initially turned out in Southern's passenger Virginia green with gold stripping and silver (aluminium) details with whitewall tyres, No. 4501 operated as the main star of Southern's steam program until being replaced by larger steam locomotives in 1985. The locomotive ran again from 1991 until 1994, when Southern's successor Norfolk Southern discontinued the steam program due to rising insurance cost and decreasing rail network availability.

Afterwards, No. 4501 operated for its owner, the Tennessee Valley Railroad Museum (TVRM) in Chattanooga, Tennessee. Merriman was a founding member of TVRM alongside Robert “Bob” Soule, and eventually handed 4501 over from his personal property to museum property. Repainted into its circa 1935 freight black livery in 1996, the locomotive was retired when its boiler ticket certificate expired in 1998. With the coming of Norfolk Southern’s 21st Century Steam Program and the success of TVRM's Southern Railway 630, the restoration on No. 4501 began in 2012 and completed in 2014, with period upgrades such as a feedwater heater and mechanical stoker added, which most classmates received but 4501 (once dropped from a crane) long the “Shop Queen” never received. Today, the locomotive operates in tourist excursion service for the Tennessee Valley Railroad Museum (TVRM) in Chattanooga, Tennessee, traditionally on the longer trips to Summerville, Georgia throughout the year and on TVRM's Missionary Ridge Local as needed.

No. 4501 worked on many different divisions of the Southern Railway system from Tennessee, Virginia, Kentucky, and Indiana. In October 1948, the Kentucky and Tennessee Railway (K&T) headquartered in Stearns, Kentucky purchased the locomotive and renumbered it as their No. 12. When the Kentucky and Tennessee Railway purchased three ALCO S-2s from the Denver & Rio Grande Western in February 1964, the locomotive, along with the K&T's other steam locomotives, were retired from revenue service. Railfan Paul H. Merriman bought the locomotive for the 4501 Corporation with $5,000 of his own money and restored it for excursion use on the Southern Railway System.

On June 6, 1964, after running to Chattanooga from the K&T, an initial restoration was done by Tennessee Valley Railroad Museum (TVRM) volunteers at the facilities of the Lucey Boiler Company in Chattanooga near the TVRM's storage facilities, which were at the time located on former Western Union Company tracks.

No. 4501 was stripped down for an extensive overhaul with the thin cab floor, the rotted ash pan, and the rusty smokebox front replaced. The dented cab roof was straightened and a radio antenna was installed. In addition, the cylinder cocks were reworked and the throttle was lapped with a new airline run to the repacked reverse gear. With the blessing of Southern Railway executives, the No. 4501 was repainted in Southern's Virginia green with gold lining instead of its original freight black livery.

In November 1969, during the 75th anniversary of the Southern Railway, a historic photo session, which featured three steamers, took place in Anniston, Alabama, along the Birmingham to Atlanta mainline. This event was dubbed “Steam-O-Rama”. It featured the 4501, as well as, Savannah and Atlanta 4-6-2 No. 750, which also recently returned to steam by the Railway, and London and North Eastern Railway A3 No. 4472 “Flying Scotsman”, which was in the course of its USA tour at the time.

In the 1970s, No. 4501 was run off of Southern Railway property for a series of excursion trips on the Illinois Central (IC), the Chicago and North Western (CNW), the Milwaukee Road (MILW), the Rock Island Line (RI), and the Norfolk & Western (NW). The locomotive became famous for pulling the Old Milwaukee Special Circus World Museum train via the CNW line between Baraboo, Wisconsin and Madison, Wisconsin and the MILW line to Milwaukee, Wisconsin in summer 1973. On March 28, 1979, No. 4501 was listed on the National Register of Historic Places.

On April 11, 1981, the locomotive suffered a cracked front flue sheet at Dalton, Georgia during an excursion trip from Atlanta, Georgia to Chattanooga. A diesel locomotive pulled the remainder of the trip and No. 4501 was towed back to the Irondale Workshop in Birmingham, Alabama for a long-term rebuild. The locomotive would not operate again until November 1984. Following the rebuild, No. 4501 received a newly-welded tender body with the water tank capacity decreased to 13,400 US gallons (51,000 l) and the tender's old Andrews pilot trucks were replaced with modern roller bearing trucks. At the same time, No. 4501 was repainted into a lighter Sylvan Green (later diesel era) scheme with dark gray smokebox, black wheel centers, unpolished rods, and no bell acorn.

On November 3, 1991, during Southern's successor Norfolk Southern's 25th Anniversary of their Steam Program, No. 4501 joined the Norfolk & Western steam locomotives J Class No. 611 and A Class No. 1218 to triple head a 28-car passenger excursion train from Chattanooga to Atlanta. At Ooltewah, Tennessee, No. 4501 took a few coaches for a complete round trip, turning around at Cleveland, Tennessee. Afterwards, No. 611 and No. 1218 completed the rest of the trip to Atlanta.

After Norfolk Southern ended their steam program in late 1994, No. 4501 remained at TVRM operating their excursions through North Georgia on the former Central of Georgia ’C’ line that became the Chattooga and Chickamauga Railway shortline. In 1996, the locomotive was repainted into its circa 1930s freight black livery during TVRM's 35th anniversary, until it was retired due to the expiration of its boiler ticket on September 20, 1998. 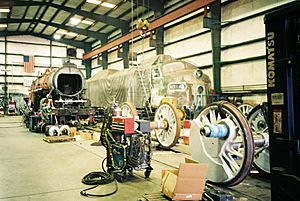 In June 2010, Norfolk Southern announced that they would run excursions with No. 4501 and 2-8-0 "Consolidation" No. 630 with their new 21st Century Steam program. In March 2011, Southern No. 630 returned to service pulling tourist trains for the TVRM and some of the first main-line excursion trips for the 21st Century Steam program. With No. 630 in operating condition, the restoration of No. 4501 began in 2012.

During the restoration of No. 4501 around 2013, the locomotive received upgrades to its trailing wheels that included the addition of roller bearings to help guide the locomotive through track curves. A replica of a Worthington SA type feedwater heater from a China Railways QJ Class 2-10-2 was built to improve the locomotive's performance. Its tender was given a mechanical stoker from Canadian National Railway No. 5288, a 4-6-2 steam locomotive that was also on display at TVRM. The Armstrong lubricators that spring-loaded the driving wheels were replenished by an automatic lubricator from the North Yorkshire Moors Railway in North Yorkshire, England. No. 4501's boiler also received attention and was recertified from its operating pressure of 200 psi (1.38 MPa) to 205 psi (1.41 MPa), which created a slight increase in tractive effort. 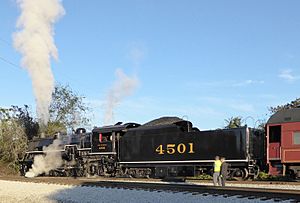 No. 4501 preparing to pull the Summerville Steam Special excursion in October 2014

On September 6, 2014, No. 4501 was steamed up for the first time since 1998 and its first public debut took place at TVRM's 2014 Railfest. The locomotive made a test run from Chattanooga to LaFayette, Georgia on the Chattooga and Chickamauga Railway line on September 25, 2014 to prepare it for the TVRM's upcoming seasonal Summerville Steam Special on October 4 that year.

On May 1, 2015, No. 4501 successfully completed a test-run on the Norfolk Southern mainline from TVRM to Cleveland, Tennessee and back.

On September 12 and 13, 2015, No. 4501 ran a round-trip excursion from Chattanooga to Cleveland, during TVRM's 2015 Railfest. Two weeks later, the locomotive ran the Nancy Hanks Special excursion from Macon, Georgia to Tennille, Georgia.

No. 4501 was also planned to run the Piedmont Limited excursion from Atlanta to Toccoa, Georgia on October 3 and 4, 2015. However, it was cancelled on October 1 due to Hurricane Joaquin. As a result, Norfolk Southern officially concluded their 21st Century Steam program. Despite this, the N&W J Class No. 611 locomotive, which had been restored since 2015, continued to run various excursions across the Norfolk Southern system in Virginia and North Carolina. No. 4501 remained at the TVRM to continue regular operations and became the main motive power for its annual Summerville Steam Special excursion from Chattanooga to Summerville, Georgia.

In September 2019, No. 4501 was dressed up as Louisville & Nashville steam locomotive J-3 class No. 1593 for the L&N Historical Society annual convention.

All content from Kiddle encyclopedia articles (including the article images and facts) can be freely used under Attribution-ShareAlike license, unless stated otherwise. Cite this article:
Southern Railway 4501 Facts for Kids. Kiddle Encyclopedia.