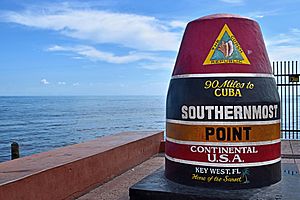 Concrete marker near the "Southernmost point in the continental United States" located in Key West, Florida, at the corner of South and Whitehead Streets

The Southernmost Point Buoy is an anchored concrete buoy in Key West, Florida, marking the southernmost point in the continental United States, the lowest latitude land of contiguous North American states. It is 18 feet above sea level. The large painted buoy was established as a tourist attraction in 1983 by the city at the corner of South Street and Whitehead Street. It is one of the most visited and photographed attractions in the United States.

The southernmost point was originally marked with a small sign, before the City of Key West erected the now famous concrete buoy in 1983. The concrete buoy has overall withstood several hurricanes and is a gathering place for photographs and tourists. The paint job was damaged by Hurricane Irma in September 2017, but it was refurbished later that year by the original artist supported by the City of Key West which values the landmark as a tourist attraction. Cuba is roughly 90 miles south of this point in Key West, although this was not originally on the marker, but rather on a smaller sign next to marker. 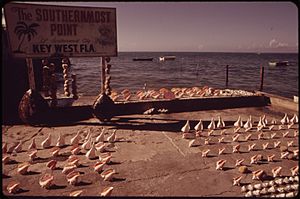 The spot was originally marked with sign, shown here in 1972 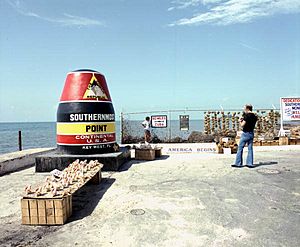 The buoy is maintained by the Key West Public Works Department and it was dedicated on September 10, 1983. The painted concrete buoy is 12 feet tall and 7 feet wide.

Heading north east begins the route along US 1, a road which goes all the way to Fort Kent, Maine. Next to maker is a cement telegraph hut. This hut housed underwater telephone cable that connected Key West to Havana in 1921. The cable hut is a small structure just a little east of the Southernmost marker where the cable went into the sea.

In November 1983, the text did not include the line "90 miles to Cuba", which was still written on a smaller sign on fence next to the buoy. Next to the buoy, also as of November 1983, there was a script "America Begins" painted on a curb below the 90 miles to Cuba sign. Also at that time the buoy did not include the text "Home of the Sunset". (see also Mallory Square, which hosts Key West sunset celebration)

By the 2010s, there was a webcam that relays video of the street corner where the buoy is located to the Internet.

The buoy paint job was done by local painter-artist Danny Acosta, and the City of Key West hired him to paint again after it was damaged by Hurricane Irma in 2017.

Key West in red on map is part of the Keys, with Monroe County in dark green on an inset map of the State of Florida

Further south, land on the Truman Annex property, just west-southwest of the buoy, is the true southernmost point on the island (approximately 900 feet (270 m) farther south near 24°32'39.2"N 81°48'17.8"W), but it has no marker since it is U.S. Navy property and cannot be entered by civilian tourists.

The claim on the buoy stating "90 miles to Cuba" may be a rounded number, since Cuba, at its closest point is 94 statute (81 nautical) miles due south. One book author suggests they meant 90 nautical miles, from a distance of 103 statute ('regular') miles measuring from Key West to Havana, Cuba. West of Key West there are a number of islands that are farther south including Man, Woman, and Ballast Key, and even on Key West the island's land extends farther south heading west such as at Fort Zachary Taylor Park.

The 1970 sign at this site said that it was the Southernmost Point of Southernmost City of Key West. Over time as the signs were replaced, the amount of short messages increased and slowly morphed into the longer string of text today.

All content from Kiddle encyclopedia articles (including the article images and facts) can be freely used under Attribution-ShareAlike license, unless stated otherwise. Cite this article:
Southernmost point buoy Facts for Kids. Kiddle Encyclopedia.